Roma head coach Paulo Fonseca said the club will discuss the error made in the Coppa Italia upset against Spezia after the club used six substitutes.

Spezi shocked Roma 4-2 after extra time in the Italian capital, where Fonseca's side capitulated and sensationally made one substitution too many in the last 16 on Wednesday (AEDT).

Roma would have been eliminated by default even if they won at home to Spezia after Fonseca introduced Ibanez for Pedro in extra time, having already made five changes to his line-up.

Fonseca's Roma believed they could use six substitutes – an additional change in extra time as seen in cup competitions – but that was not the case in the Coppa Italia. 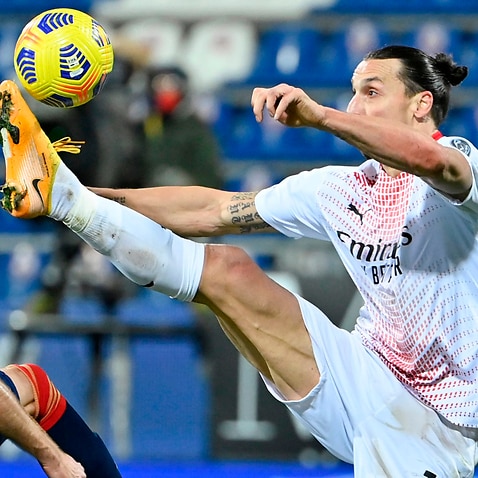 Asked about the mistake at Stadio Olimpico, under-fire boss Fonseca – who oversaw a humiliating 3-0 derby loss to Lazio in Serie A on Friday – said post-match: "If there is an issue, we have time to discuss that internally. If there is."

Fonseca was looking to bolster his defence after centre-back Gianluca Mancini was shown a second yellow card in the 91st minute, and goalkeeper Pau Lopez saw red just seconds later.

With Roma down to nine men, Spezia capitalised on their numerical advantage as Riccardo Saponara and Daniele Verde struck in extra time.

Roma had rallied from 2-0 down inside 15 minutes to force extra time via Lorenzo Pellegrini's 43rd-minute penalty and Henrikh Mkhitaryan's fine finish with 17 minutes remaining.

Hosts Roma conceded two goals during the first 15 minutes of play, in all competitions, for the first time since January 2020 as they were eliminated in the Coppa Italia round of 16 for just the third time in the last 20 seasons – twice against Spezia.

It was also the first time since 2015-16 that Roma played extra time in the Coppa Italia.

"We had a bad start to the game; the penalty, and then another moment that's hard to really understand," Fonseca said. "But the team responded, they played well, they created chances and it could have been a different result.

"We missed so many chances and so then, with two men sent off, it all became much harder."

"It's a tough moment. We wanted to go further in the cup, but I can't say anything bad about the attitude of the players. We have to now focus on the next game," Fonseca continued.

Pressure is mounting on Fonseca, who was appointed in 2019, but the Portuguese tactician said: "My future has been up for discussion ever since I got here. I am encouraged by the position we have in the league right now – it's where we want to be – and I have confidence in my team. But when we don't win I am always being discussed. I have to stay focused on my job."

Roma – winless in three matches across all competitions having conceded nine goals – are fourth in Serie A, nine points behind leaders Milan through 18 games.