After marking his final appearance for Netherlands with two goals, we look at Arjen Robben's career in numbers after 14 years of representing his country.

Robben played his last game for the Oranje on Wednesday (AEDT) as the Netherlands beat Sweden 2-0 but missed out on a 2018 FIFA World Cup play-off place, the Bayern Munich winger bowing out in style as his first-half double helped them to victory. 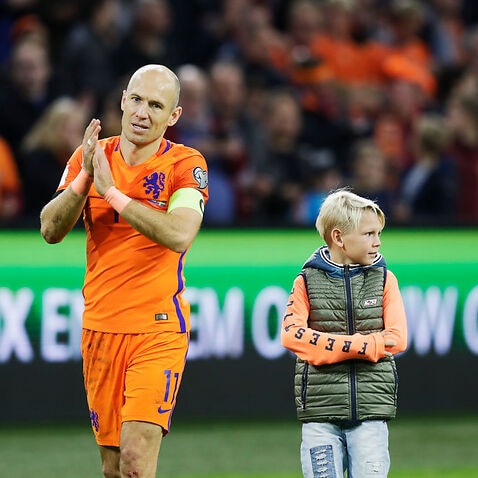 Here we look back at the best international statistics of a player who was part of the Netherlands side that reached the World Cup final in 2010.

- Robben scored or assisted a goal for Netherlands on average once every 112 minutes (37 goals, 29 assists). - Robben became the first player to score at least two goals in his final game for Netherlands since Piet de Boer in 1937.

- With his two goals against Sweden, Robben has now scored against 26 different countries; only Robin van Persie (30) and Klaas-Jan Huntelaar (27) have scored against more.

- Robben attempted more shots (seven) and shots on target (four) than any other player in his final Netherlands game v Sweden.

- Robben (106) is one of only five players with 100 or more dribbles at the World Cup finals since 1966, along with Lionel Messi, Diego Maradona, Jairzinho and Mario Kempes.

- Robben has been fouled more often at the World Cup than any other player since the 2006 edition (47 times). Robben was the only player with more than one shot on target in the 2010 World Cup final (two).