What's beyond that, he's yet to contemplate as he prepares to run out for Australia at a fourth FIFA World Cup.

Cahill's extraordinary longevity has led him to become the record goalscorer for the national team.

At 38, he's the fourth-oldest player in Russia - a living, breathing monument to Australian football.

But without a club contract to play on past the 2018 tournament, the end might be coming sooner rather than later for Australia's greatest goalscorer.

Speaking in Kazan on Thursday as the Socceroos prepare for their opener against France, Cahill wouldn't be drawn on his playing future.

"We train today. We train the day after and we play France. That's all that's in my mind," Cahill said.

What's clear is that he's spent the past year entirely focused on the national team.

Landing a romantic move back to his first overseas club, Championship side Millwall, in January, Cahill has spent the past five months on the bench.

In the past year, he's played less than three hours of football at club level, making just one start and scoring no goals. 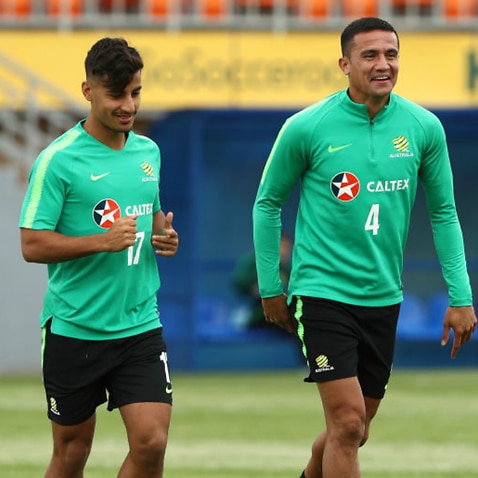 It's understandable why there might be doubts on Cahill's ability to have an impact in Russia - and beyond - but the striker says he'll be happy to let his football do the talking.

"The proof is always in the pudding because I have not missed a training session here," he said.

"When it comes to being physically and mentally ready ... you guys can look at the game time but I have been lucky. I spent a whole year getting ready for three games.

"The moment that I decided to go to Millwall was purely to be involved, if I could, physically and mentally at my fourth World Cup.

"The training and the games that I played there, it helped so much.

"I am not going to be fazed by outside noise because, as a professional, you have got to hit certain levels of physical data, professionalism, that gets you to where I'm sitting today.

"Now that I'm actually here and I can talk about it, it's amazing. It's every kid's dream."

That dream could result in Cahill becoming just the fourth man - after Pele, Thomas Muller and Uwe Seeler - to score at four World Cups, securing his place as an immortal of the sport.

Cahill acknowledged the scale of the achievement but said he wasn't getting ahead of himself in Russia.

"I'll be so excited and so happy just to be able to step on the pitch," he said.

"After that, I'm in a different world. I'd love to join the greats, being an Australian ... to do something special for my country."