A decade on from signing with Brisbane Roar for a “seventh-month” stay, Besart Berisha further etched himself in the local game’s history on Saturday by becoming the second all-time highest scorer in Australian national league history - and there’s one goal that immediately jumps out to him.

Taking his season total to three, Berisha secured a brace in Western United’s 4-1 win over Macarthur FC on Saturday, equalling and then moved past former Socceroo and Brisbane Strikers’ marksman Rod Brown with 138 goals.

The marksman now only trails Adelaide City and Perth Glory legend Damian Mori on the all-time list - albeit the 45-time Socceroos’ mark of 240 national league goals looms as a record that may well never be broken.

Since arriving in Australian in 2011 to sign with Ange Postecoglou’s Brisbane Roar, Berisha has scored a goal in every 1.58 games he has played across stints at Roar, Melbourne Victory and Western - a rate quicker than fellow residents on the top-five all-time list in Mori (1.86), Brown (2.52), John Kosmina (2.17) and Archie Thompson (2.58). Not bad for a stint that was only supposed to last seven months before he went back to Europe.

“Being second in all of Australian history is something very special, and I’m very grateful,” Berisha said. “It’s hard always to imagine that I can do this because when I came here, I came for a seventh-month contract, and I didn’t know that I was going to be here so long.

“I’m so grateful. To find the words is very hard. It’s very special.

“[Before signing with Brisbane], my career, after injury, was down. I was at the peak in Europe. At this moment, I was one of the most talented players in Europe in my 20s, and then I got injured and came to Australia. The plan was for seven months.

“I fell in love with this country. I remember when I arrived in Brisbane, I loved playing in the A-League. This league is something special to me. I enjoyed the football. Many people say enjoy what you do, and this is what I found; I found joy in Australia, in the A-League, and that’s why I’m still here.

“I’m really grateful and really humbled to achieve such success. It just motivates me to keep going because it is special.”

With 138 goals to choose from across his decade in Australia, one would expect it would be difficult for a favourite to be picked out from the bunch without a lot of tortuous deliberation. However, the 35-year-old displayed no hesitation when asked to pick out which of his strikes was the closest to his heart.

The GREATEST day in AAMI Park's 10 years, as voted by you, is the 2015 A-League Grand Final when @gomvfc smashed Sydney FC 3-0.

The moment Berisha refers to arrived in the 2014/15 A-League Grand Final, he collected a cross that had ricocheted off he and teammate Gui Finkler in the 34th minute, sublimely turned his marker and fired a shot inside the far post.

In front of a full house at AAMI Park, VIctory then went on to win that match over their bitter Sky Blue foes 3-0 and lift their third A-League title.

“My god... that was crazy emotional”, Berisha remembered. “Maybe just because this club, Victory, was waiting for five seasons to have new success.

“And then in their own stadium in front of a full house…It was incredible.”

As one would expect, Mark Rudan, the man who brought Berisha back to the A-League after a frustrating stint in Japan, praised his striker following the contest. The Western gaffer also took the time to credit those that had now been shifted down the all-time list. 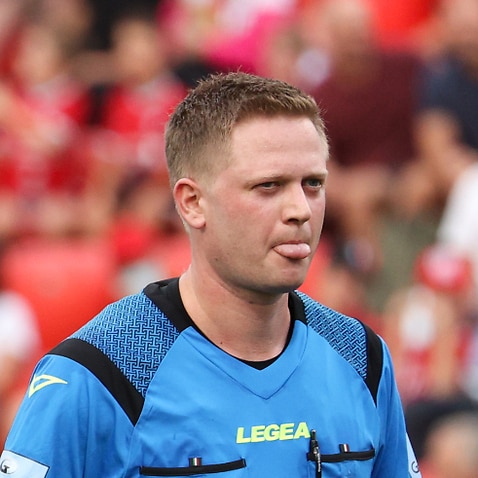 “The game didn’t start in 2005, the game started a long time before that and we should keep talking about our past heroes like Rod Brown and the John Kosmina’s and the Damian Mori’s. Not enough has been spoken about those sort of guys.

“But Besart Berisha in his own right has jumped and leapfrogged himself and he’s got fantastic status in this country. But he needs to keep going and he will because he’s done it all his career.”