Wayne Rooney is England's all-time record scorer after scoring his 50th international goal, in the 2-0 EURO 2016 qualifying win over Switzerland at Wembley.

The goal, scored from the spot after Raheem Sterling was fouled, took him past the great Bobby Charlton's tally of 49 goals, which had stood as a record for 45 years.

The penalty is Rooney's second in as many games for England, as he drew level with Charlton from the spot against San Marino on the weekend. 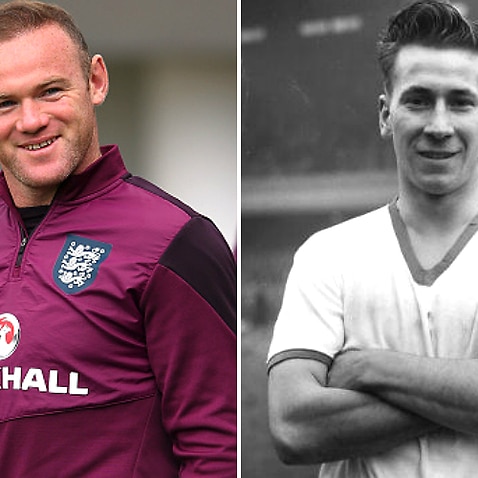 How Wayne Rooney stacks up against the great Bobby Charlton? The Manchester United striker has endured a 10-match Premier League goalscoring drought, but wrote his name into the history books on the international stage with his 300th goal for club and country.

It wasn't all plain sailing for England, which lost Fabian Delph to another hamstring injury after only nine seconds of the match.

He was replaced by Ross Barkley in midfield, but England needed another substitute, Harry Kane, to break the deadlock.

Kane thrashed home a finish in the 67th minute to put England ahead. Like Rooney, Kane hasn't scored at club level this season, but he has scored in both England games this term.

Rooney's penalty made certain England would make it eight from eight in this qualifying campaign, and qualification was assured after the weekend win against San Marino.

Rooney scored his first England goal in a 1-1 draw with FYR Macedonia in 2003.

The striker scored four goals in four games at EURO 2004 and his injury against Portugal in the quarter final cost England its best chance of winning a major tournament since FIFA World Cup 1990, and EURO 1996, both which saw it knocked out by Germany on penalties, at the semi final stage.

Rooney, who was made England captain after the international retirements of Steven Gerrard and Frank Lampard, pulled level with second-placed Gary Lineker on 48 goals when he found the net against Slovenia in June.

The 29-year-old levelled Charlton's record in the 6-0 win over San Marino, but saved the record-breaking strike for the parochial Wembley crowd.

Switzerland, having looked resolute while relatively dangerous on the break, remains in pole position to join England in France from Group E, although Slovenia's 1-0 win over Estonia makes life slightly trickier for Vladimir Petkovic's side.

There was a moment of history for San Marino in its 2-1 defeat to Lithuania.

Fiodor Cernych gave the home side an early lead but, just minutes after goalkeeper Giedrius Arlauskis had been sent off, San Marino scored the first goal of qualifying through Matteo Vitaioli - its first away from home in the tournament for 14 years.

But Lukas Spalvis denied the visitor a famous draw as he scored in injury-time to win it for Lithuania.

Delph was one of four England changes, but the Manchester City midfielder was forced to hobble off inside the first minute having appeared to tweak his hamstring.

Delph suffered the same fate on his City debut during the close-season and Hodgson was forced to reshuffle his pack, with Barkley introduced.

The enforced change failed to halt England's momentum, though - Gary Cahill's header testing Yann Sommer before Rooney set up James Milner for a shot on target, having curled wide from inside the area minutes earlier.

Xherdan Shaqiri offered the bulk of Switzerland's limited threat before the break before Barkley saw a curled effort blocked early in the second half.

Rooney again threated with a header, after positive running down the right from Alex Oxlade-Chamberlain, before testing Sommer from distance.

However, England failed to get the breakthrough their attacking intent warranted, while the visitor looked threatening on the counter, going close to an opener with Granit Xhaka's header from a corner.

Kane was introduced prior to the hour mark, Rooney dropping behind the Tottenham forward, and it proved an inspired decision as the youngster made it three goals from four senior international outings soon after.

Genuinely thrilled for @WayneRooney . A terrific player with a record that will last for a long, long time. Or will it @hkane28 ?

Cutting across the ball, his strike evaded a clutch of Swiss defenders to beat Sommer and offer a further reminder that his goalscoring exploits last season are unlikely to be a one-off.

Rooney's moment was still to come and arrived when Xhaka brought down the lively Sterling.

The skipper stepped up amid excitement from the home crowd and, while Sommer got a hand to the ball, Rooney was not to be denied - the skipper breaking new ground in an England shirt on another positive night for the hosts.