Sergio Ramos is expected to miss at least three games for Real Madrid after the club confirmed he has suffered a hamstring strain.

While Madrid did not specify how long they will be without their captain, reports in the Spanish media claimed he will not be available again in November.

Zinedine Zidane's side are due to face Villarreal in LaLiga on Saturday, with a clash against Deportivo Alaves following a Champions League trip to Inter on Wednesday.

Ramos was forced off with the injury in the first half of Spain's 6-0 triumph over Germany in the Nations League.

A Madrid statement released on Thursday read: "After the tests carried out today on Sergio Ramos by the Real Madrid medical department, the player has been diagnosed with a strained hamstring in his right leg. His recovery will continue to be assessed." Zidane will also have concerns over Raphael Varane after the centre-back went off at half-time in France's 4-2 victory against Sweden.

Madrid's defensive options are not expected to be depleted entirely, however, with Eder Militao (coronavirus) and Nacho Fernandez (knee) set to return for the trip to Estadio de la Ceramica.

Los Blancos have played 115 LaLiga games without Ramos since he signed from Sevilla in August 2005 and have only lost 10 of those. 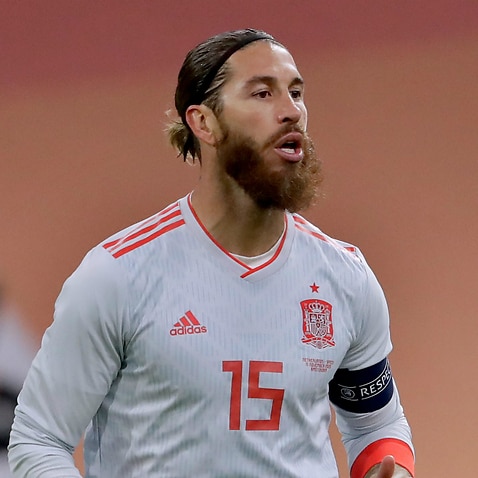 Their win percentage when he does not feature is 78.3 per cent, compared to 67.1 across his 462 appearances in the top flight.

Madrid have lost two of their past four LaLiga games, as many as in their previous 33 matches in the competition, and they will be looking to stop Villarreal making it seven unbeaten in the league, which would represent their best run since October 2016.