Decorated Socceroos assistant coach Rene Meulensteen has expressed surprise at the seeming lack of Premier League or continental interest in Tom Rogic, as the Australia playmaker edges ever closer to joining a club in Qatar.

Right-hand man to Sir Alex Ferguson when Manchester United won the Premier League and UEFA Champions League double back in 2008, the Dutchman knows what it takes for a player to succeed in England’s top echelon.
And he’s convinced the unsettled Celtic star is cut from the right cloth.

Having spent eight formative coaching years in Qatar before heading to Old Trafford in 2001, Meulensteen, 56, also believes the Gulf State would provide a fitting palate for Rogic, 27, to unfurl his artistry.

And, most importantly, get the minutes he needs to continue excelling with the national team, having all but fallen off the radar at Celtic Park. “I’m really quite surprised a Premier League club, or a top Championship team, or even a team elsewhere in Europe that’s pushing for Champions League or Europe League hasn’t come for him,” Meulensteen told The World Game.

“He’s at a great age and has fantastic qualities and is tactically also very intelligent.

“Used well, in the right system, he can be a big asset for a lot of teams.

“He has Premier League quality but you need to adapt in your mindset because stepping onto the pitch at Celtic you know you’re probably going to win.

“That’s not the case in the Premier League where you have to do far more without the ball and it’s a lot more demanding.

“It’s about being adaptable and deciding to graft every day in training because there are no easy games at that level.

“I don’t see an issue with Tom being able to do that and perhaps he does have other things on the table.

“But if Qatar has come calling then there will also be a (financial) benefit for him in what is probably an under-rated and under-appreciated competition.” 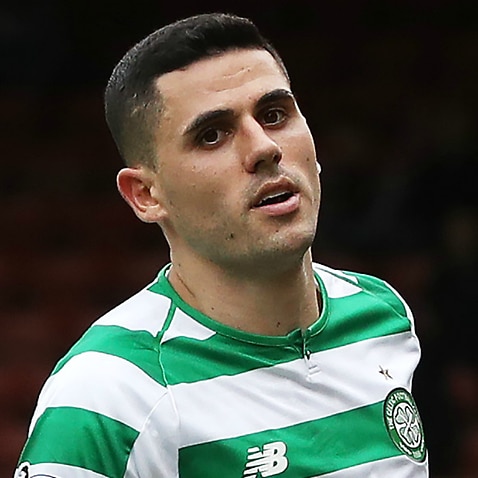 Rogic needs to make a move to revive his stagnant career

Rogic’s impending exit after 125 appearances and 25 goals in seven injury-abbreviated years has divided Celtic fans, with some imploring coach Neil Lennon to bring him back into the fold and others saying it’s time he moved on.

If the mooted $7.3 million move proceeds, Meulensteen has no issue with the timing, whilst also acknowledging the role Rogic has played in a period of unparalleled domestic dominance for the Bhoys.

“He’s been there a long time,” he added. “He loves the club and has won a lot of trophies there.

“I’ve asked him previously whether he’d like to move to the Premier League but I think he’s always been content at Celtic.

“Don’t forget they’re a huge club and you can never under-estimate winning, it’s the greatest feeling. You can never get enough.

“But now, where he’s limited with his game time, he might see this as an opportunity to try something different.

“We’ve got World Cup qualifiers around the corner, and we expect qualification for Qatar 2022 beyond that.”

Meulensteen said, from the perspective of Socceroos head coach Graham Arnold, getting minutes into Rogic’s legs was vital heading into a clogged calendar of FIFA World Cup qualifiers, and possibly the Copa America, in 2021. “The standard of the league in Qatar has jumped in recent years, and they’ve invested heavily in local talent and not just foreigners,” he added.

“Top players like Xavi and Ronald De Boer played there, and so many others.

“The stadiums are new, getting around is easy in a small country and the league is played when the heat’s not so bad.

“In terms of resources and environment it’s excellent, and I don’t think Tom’s game would suffer by going there.”