PSG ended up as the most disappointing team in this year's competition as the first half of the group stage drew to a close.

After failing miserably at home to Manchester United on match day one of Group H, they unconvincingly beat Turkey's Istanbul Basaksehir before crashing to another defeat, this time against Red Bull Leipzig, the team they beat comfortably in last season's semi-final.

Fighting spirit is not a term usually associated with PSG.

Over the years the dominant club in Ligue 1 have made some serious assaults on the one competition that has eluded them but they invariably failed to deliver.

The two defeats in this year's tournament - and the manner in which they played - would suggest that, despite their spending power and impressive squad, PSG do not appear to have the right temperament for success. In other words they lack the bottle for a fight when the going gets tough. 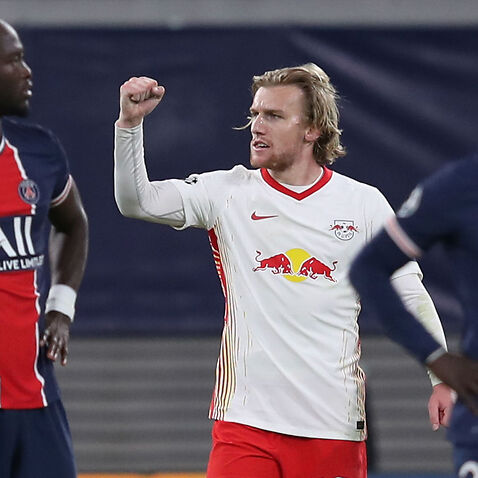 Harsh, maybe. But the evidence from years of meek surrenders and disappointing performances justifies this claim.

PSG showed little fight in Leipzig and allowed the home team to come back from a goal down to win 2-1.

PSG were without injured Neymar and Kylian Mbappe but they would be foolish to attribute this latest debacle to the absence of their star strikers.

PSG lost because they played poorly and they ended up losing their heads too when Idrissa Gana Gueye and Presnel Kimbempe were sent off in the second half.

No wonder Thomas Tuchel cut a disconsolate figure on the bench.

PSG are not the only team in trouble.

Inconsistent Inter have flattered to deceive so far in Group B. Coach Antonio Conte has a pretty decent squad of players to work with but the team relies too much on free-scoring striker Romelu Lukaku.

The big Belgian snared a point for Inter with a last-gasp goal against Borussia Monchengladbach on match day one but his absence through injury was sorely felt when Inter created and missed several scoring chances before losing 3-2 to Real Madrid on match day three.

Inter will have to fall back on their traditional never-say-die spirit to get out of the hole they are in at the moment.

Monchengladbach have emerged as the surprise team of the competition after a series of uplifting performances.

The German team are sitting on top of their group after causing a major upset by crushing Shakhtar Donetsk 6-0 in a mismatch in Kyiv.

Gladbach owe their resurgence to an efficient, no-frills style of play that is not unlike that of Leipzig, who turned many heads by reaching last season's semi-finals.

They were the better team but could only draw their first two matches against Inter and Real Madrid due to last-minute goals on both occasions.

They appear to be your typical Teutonic team with tons of steel, all-round ability and a strong temperament.

Yet they probably owe their startling success to a touch of French flair.

Strikers Alassane Plea scored a glorious hat-trick in Gladbach's six-pack in Kyiv while Marcus Thuram, who is the son of 1998 FIFA World Cup winner Lilian, scored twice in the 2-2 draw with Madrid on match day two.

They are a lethal cocktail of German grit and French finesse.

It is probably too early to tell if Gladbach can maintain the rage and emulate Leipzig but, with two of their remaining three matches at home, coach Marco Rose would be perfectly entitled to feel that a spot in the knockout phase is there for the taking.