Perth Glory coach Tony Popovic has extracted plenty of positives from a 1-0 away loss to Sydney FC in which he gave his 17-year-old son Kristian an A-League debut.

Glory displayed their depth with a very competitive display despite Popovic making six changes to the side which started in their Premiers' Plate-clinching win over Newcastle Jets just four days earlier.

Matthew Spiranovic, Dino Djulbic and Andy Keogh were rested, while Jason Davidson and Juande were injured and Diego Castro played just the second half of Thursday's game at Kogarah's Jubilee Oval.

Sydney had outscored Perth 19-1 in winning their last five home games against them, but were made to fight hard before securing a second victory in their three league clashes with Glory this season.

"I think what we saw today is how far we've come as a football club," Popovic said.

"Sydney FC is a fantastic club, a fantastic team and you get the ultimate respect by them sitting off and wanting to sit in their block and play on the counter, play in transition.

''I'm not sure that Perth has ever seen that happen to them against Sydney FC in the past.

"When you consider the great record that Sydney FC has against Perth, they usually dominate and take the game to Perth at home.

"We didn't get the result we wanted, but I think overall we gained a lot from the performance, and also the minutes that players have gained, which gives them a chance to be ready for what's ahead." 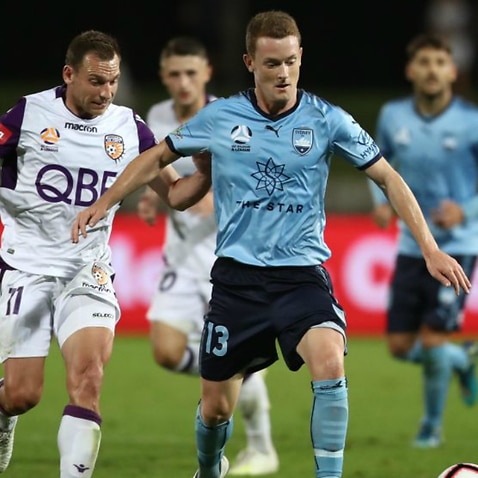 Sydney tighten grip on second with win over Glory

Popovic brought this son Kristian off the bench with 15 minutes to go and the young midfielder turned in a good cameo performance.

'As a coach I can say that he grew into the game and almost set up a chance for ivan (Franjic) and the longer it went he looked like he belonged more and more."

Glory have completed their away fixtures for the season and will play their last round game against Wellington at home followed by a major semi-final and possibly grand final in Perth.

"We won't be travelling anymore that's key for us," Popovic said.

He expected Juande, Davidson and Socceroo forward Chris Ikonomidis, to return from injury for the match against Wellington Phoenix on Sunday week.