Australia coach Ange Postecoglou will make at least a couple of changes for Tuesday's 2018 FIFA World Cup qualifier against Bangladesh as he seeks further progression from his squad. 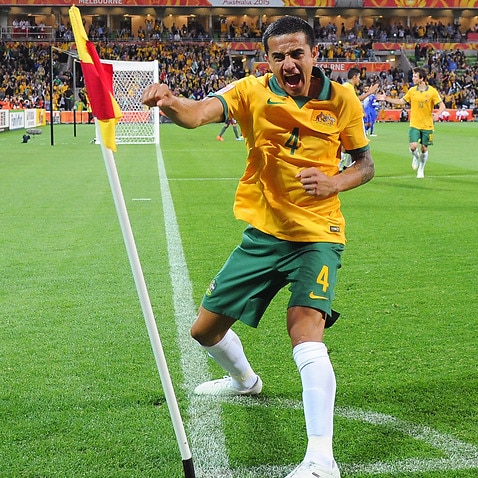 Australia needs Cahill more than ever

Speaking on Monday, Postecoglou quashed any fears about a shortage of options in attack and tipped a big game from evergreen Shanghai Shenhua striker Tim Cahill.

The Socceroos have been hit by injury for this camp, especially in attack, with Celtic's Tom Rogic and Roda JC's Tomi Juric returning to their clubs after picking up minor knocks in the win over Kyrgyzstan on Thursday.

With Bundesliga-based winger Mathew Leckie an earlier withdrawal due to illness, it means the Socceroos boss has fewer options in the front third in Dhaka.

"Not really. It's not too much different to the last game," Postecoglou said when asked if he was concerned about the squad's attacking depth.

"Jimmy Troisi only played about 20 minutes [against Kyrgyzstan] so he's good to go, Tommy Oar didn't play so he's fresh.

"I think we're quite comfortable in those areas.

"[Nathan Burns] looked good, looked sharp and caused [Kyrgyzstan] problems. He got in behind and could have had a couple of goals.

"He combined well with Timmy as well. It's good to have those options.”

The Socceroos crushed Bangladesh 5-0 when they played in Perth in September and another huge win is expected at the Bangabandhu National Stadium.

But the margin is not the main concern for Postecoglou, who wants to see improvement in performance from his developing side.

"It's not about how many goals we score but how we perform," he said.

"We created enough opportunities against Kyrgyzstan to score five or six, if not more. It comes down to performance. If we play well, we'll get the goals. I'm not going to set any targets.

"The pitch by all accounts is not in great condition but that's pretty consistent in all the away games.

"It's not a concern. All these things are consistent with playing away from home. There's always challenges and it's how you deal with it.

"I'm looking for progression from [the Kyrgyzstan game]."

The Socceroos created enough opportunities against Kyrgyzstan to claim a much bigger win.

While Cahill did add to his incredible international goalscoring record, he could have scored several more.

"He [Cahill] was pretty disappointed not to bag a few more. He got into good areas and was unlucky a few times ... but he scored again," Postecoglou said of Australia’s all-time leading goalscorer.

"It's just great to see at this stage of his career he's still going strong, still got great energy and unbelievable appetite for the game to make every post a winner.

"He’s backed up well and I know he’s looking forward to tomorrow night."