Sick of defending his own attitudes and structures, Australia coach Ange Postecoglou wants fans to share in his optimism for the national team.

Postecoglou has ended a trying but ultimately triumphant week by challenging Socceroos fans to match his ambitions for the 2018 FIFA World Cup.

The national team coach oversaw a 2-0 success against United Arab Emirates on Tuesday night to keep qualification for the 2018 tournament on Australia's terms.

A furious debate has raged over Postecoglou's implementation of a new 3-2-4-1 system during these qualifiers.

The Asian Cup-winning coach maintains it's an essential evolution of his plans, and one that gives Australia their best chance of success.

Patches of inconsistent play suggest the Socceroos have some way to go in that evolution. 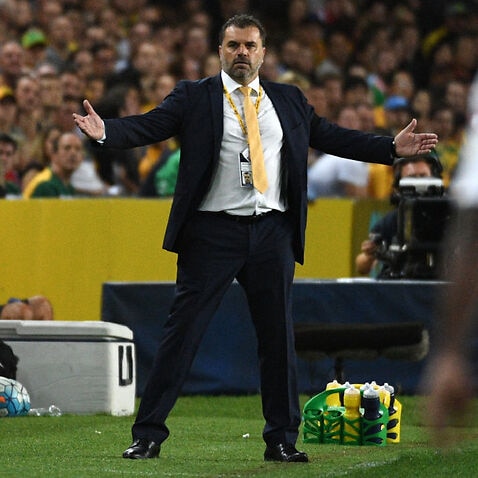 But rather than focus on the negatives, Postecoglou would like the football-supporting public to make like his playing group and embrace the challenge.

The alternative, Postecoglou argues, is to accept mediocrity.

"If I've been narkier than usual this week, it's because people challenged me and the things that actually brought me into the position in the first place.

"I don't see why we can't win one [World Cup]. It should be our objective.

"It sounds a bit far fetched when I tell people that but there isn't a sport in this world that we haven't conquered."

After the qualifying win, the patriotic boss suggested a failure to believe in local talent and ability could be behind the national nervousness. "I will not talk down to our players. I will not speak to our players as if they're not as good as somebody else just because they're Australian and I certainly am not going to sell short our coaching staff and the way we work."

The Socceroos' next qualifier is in June against Saudi Arabia in Adelaide.

Until then, the most important factor could be national team players getting crucial game time at their clubs.

And unfortunately for Postecoglou, he admits it's the "one thing I can't control".

"That's why we cast the net wide so we've got options ... if somebody isn't playing," he said.

"We're very well organised. We planned for this 18 months ago. We'll know exactly when each player's finishing and if there aren't any gaps, we'll try to fill them."