Three goals for the champions and a red card for Shimizu in the first half-hour condemned Cklamovski, who was Postecoglou's right-hand man last season, to a seventh straight defeat.

That dismal run, the worst Shimizu has endured since 1996, has left the club firmly rooted to the bottom of the 18-team table with the only positive being that due to the effects of coronavirus on this season, there will be no relegation in 2020.

Cklamovski has sounded a positive note in recent weeks, telling reporters that with the absence of a trapdoor, this season is very much an exercise in changing the team's style to emulate Yokohama’s 2019 title-winning brand of aggressive football.

Despite being a man down for the majority of the game, Shimizu pushed forward at every opportunity.

“I am proud of the players who fought bravely,” Cklamovski said, adding that he is doing all he can to break the run of defeats.

“We want to win as much as possible and now we have to focus on our next game.” 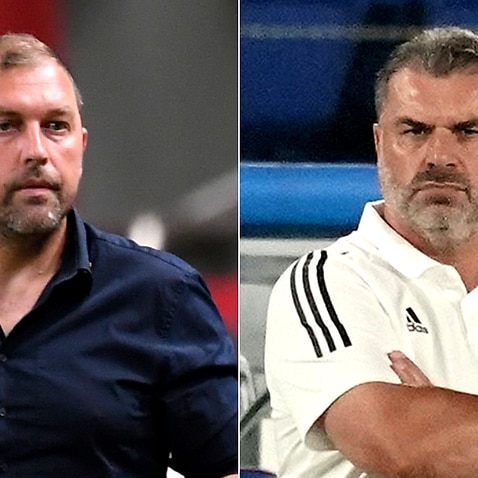 A game between the league’s second highest scorers and the team with the worst defensive record was never going to end goalless, last month’s meeting ended in a thrilling 4-3 win for Yokohama, and the first goal came inside ten minutes.

Yokohama had to deal with an early injury to Kota Watanbe and did so well, taking the lead after nine minutes.

Ryo Takano broke free down the left and while his low cross seemed to be behind Erik Lima, the Brazilian striker managed to dig the ball out from under his feet and steer the ball home.

“We attacked well and played some good football especially in the first half,” Erik said after the game. “We just have to keep going in the next fixtures.”

Things went from bad to worse soon after as Shimizu defender Yugo Tatsuta was shown a straight red after 13 minutes, a big blow for the visitors who had elected to start with three at the back.

Shimizu continued to attack and had a good shout for a penalty turned down from a corner but midway through the first-half, the game was virtually finished as a contest.

Yokohama continued to have lots of joy down the flanks. This time the goal came from the right and a beautiful sweeping cross from Kota Mizunuma was met first time by Ado Onaiwu who lifted the ball smartly over the goalkeeper from close range.

And then just before the half-hour it was three. Onaiwu turned provider, finding space in the area to cut back to Erik who made no mistake to get his second and Yokohama’s third.

After that it was a case of damage limitation for Shimizu. A team that had conceded 20 goals in the previous six games, were down three goals and one man at the home of the champions.

Yokohama continued to have around two-thirds of possession in the second-half but with the game already won and games coming thick and fast - there are four more to play by the end of the month - there was no reason for the champions to maintain maximum intensity.

“We took our chances well in the first half and overall it was a good performance,” said Postecoglou, who complimented Shimizu’s attitude.

“Despite having a man sent off, they continued to attack and it was a good game.”

The win ends a run of three losses for Yokohama though the title is out of reach as they are still 20 points behind leaders Kawasaki Frontale.

Down at the bottom however, Shimizu are in free-fall and need to break the run of defeats as soon as possible.