Cristiano Ronaldo equalled Ferenc Puskas' record for most international goals by a European man with his standout display for Portugal against Spain at the FIFA World Cup.

The Real Madrid star's hat-trick helped his team to a thrilling 3-3 draw against Spain in Sochi on Saturday (AEST).

Ronaldo's treble took him onto 84 international goals, drawing him level with Puskas, who netted the same number for Hungary.

The duo sit second on the all-time list, but remain a long way behind Iran great Ali Daei.

We take a look at the top five.

Daei was prolific throughout his international career, scoring 109 times in 149 games for Iran. The former Bayern Munich and Hertha Berlin forward's international career spanned 13 years, Daei opening his account in 1993 and netting his last Iran goal in 2006 at age 36.

One of the all-time greats, Puskas scored 84 times in 85 games for Hungary before later making four goalless appearances for Spain. A Real Madrid great, Puskas helped Hungary finish as runners-up at the 1954 World Cup, netting four times – including in the 3-2 final loss to West Germany. 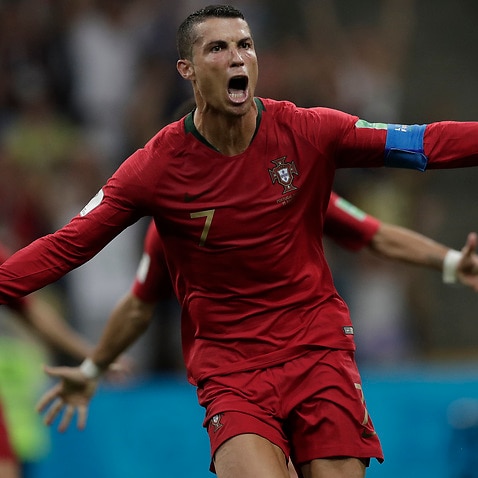 'It's my personal best' - Ronaldo hails his World Cup hat-trick

Ronaldo once more carried Portugal in their World Cup opener against Spain, his hat-trick moving him onto 84 goals in 151 games for his country. The five-time Ballon d'Or winner has regularly been relied upon by his nation, who won UEFA Euro 2016.

Kamamoto outdoes Puskas for just how prolific he was at international level, netting his 80 goals for Japan in 84 matches. The forward top-scored at the 1968 Olympics with seven goals, including a brace in a win in the bronze-medal match against Mexico.

Chitalu is widely regarded as Zambia's greatest ever player after netting 79 goals in 108 games for his country. It is said that Chitalu scored an incredible 107 times during the 1972 season. He went on to coach Zambia, but tragically died aged 45 after the team's plane crashed on the way to a World Cup qualifier in 1993.