Sam Kerr has been showered with praise after a record bag of four goals against Jamaica at the 2019 FIFA Women's World Cup.

Sam Kerr you are a bad lady.

"We, as an Australian footballing community, should be thankful that we're witnessing one of the best players in the world live. I'm very fortunate to work with her and coach her," Matildas coach Ante Milicic said.

"She's a joke. She just shows up doesn't she. Whenever you need her she's a superhero like that. We are very lucky to have her on our team," teammate Steph Catley said.

Only three players have scored 4+ goals in a single #FIFAWWC game:

"If Sam Kerr tells you to suck on that one you best believe you will be truly sucking on that one," wrote Twitter user @anndeejam.

"It doesn't get any better than that. The kid's just resilient, she's a goalscorer and she plays for the badge, her country, I just like where her attitude is - especially in the box. You can't teach that. It's something she has," Jamaica coach Hue Menzies said. 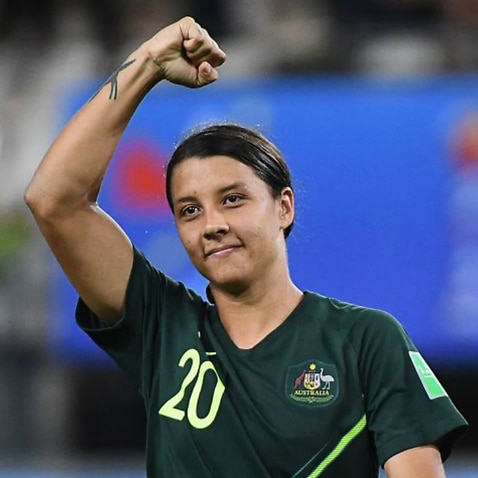