Paulinho scored twice as Guangzhou Evergrande surged to the top of AFC Champions League Group G with a thumping 6-0 win over Eastern.

The Chinese Super League side had drawn their last three group games, but returned to winning ways in style as former Tottenham midfielder Paulinho and fellow Brazilian Alan each netted doubles. Joshua Mitchell put through his own net, with Yu Hanchao completing the rout in stoppage time.

Guangzhou top Group G after Suwon Bluewings lost 1-0 to Kawasaki Frontale, but none of the top three - who are separated by just two points - are sure of a place in the last 16.

Guangzhou face Suwon in their final group stage clash, while third-placed Kawasaki have the advantage of facing Eastern, who have just one point from five games.

The status quo was maintained in Group A, which saw Marat Bikmoev's hat-trick count for nothing more than point in a 4-4 draw with Al Taawon, who snatched a point thanks to Ricardo Machado's 91st-minute goal, the Portuguese defender atoning for his earlier missed penalty.

Al Ahli and Esteghlal remain level at the top on eight points after a 1-1 stalemate, Al Taawon and Lokomotiv are three points behind but both with inferior goal differences.

Adelaide United salvaged a point as Baba Diawara scored an injury-time equaliser in a 3-3 draw with Gamba Osaka, who paid the price for Yasuhito Endo's missed penalty. 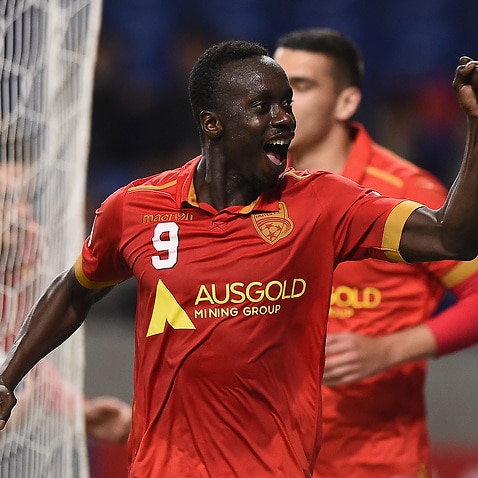 However, the A-League side are now two points behind second-placed Jeju United - 2-1 winners at Group H leaders Jiangsu Suning.

Lekhwiya secured their place in the knockout rounds with a 3-1 victory at 10-man Al Jazira, Fares Juma sent off for the hosts as Nam Tae-Hee scored a brace for the Qatari club.

The other game in Group B saw Esteghlal Khuzestan draw 1-1 at Al Fateh. Ali Al Zaqan looked to have given Al Fateh the points in the 85th minute, only for Salman Bahrani to seal a share of the spoils for the Iranian side.

Second-placed Esteghlal Khuzestan are two points ahead of Al Fateh and face Al Jazira, who have just one point to their name in a disappointing campaign, in the final group game next month.