AC Milan recovered from conceding a comical own goal but lost further ground in the race for European qualification in a 1-1 draw with Serie A's bottom club Pescara.

Vincenzo Montella's side came into this meeting at Stadio Adriatico having won five of their past seven league outings - their only defeat in that sequence coming at the home of champions Juventus.

But any positivity was punctured early on by Gabriel Paletta's desperate own goal, although goalkeeper Gianluigi Donnarumma was most culpable as he allowed his captain's backpass to escape his control and trickle into the net.

It took Milan almost the entire first half to respond to that setback, but the equaliser arrived shortly before the break as Mario Pasalic smashed home after a fortunate rebound in the box.

The visitors could not find a winner amid a late onslaught on Pescara's goal, however - Alessio Romagnoli striking the woodwork late on - and they remain seventh in the table, having slipped further behind Atalanta, who won 5-0 at Genoa, while city rivals Inter Milan host Sampdoria on Tuesday morning AEST. 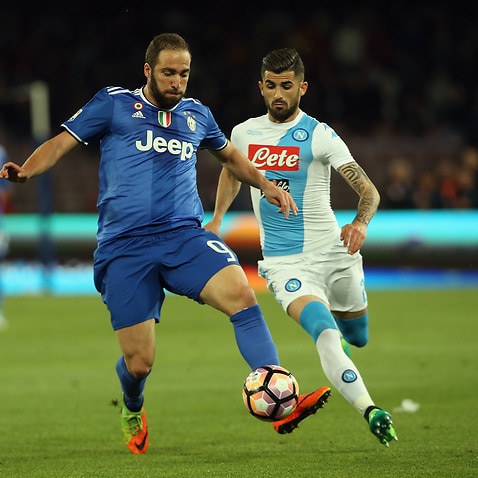 Napoli-Juventus all square on Higuain's return

The draw ended a run of four straight Pescara defeats, although they are still stuck to the foot of the table, nine points from safety with an immediate return to Serie B seemingly inevitable.

But Zdenek Zeman's side produced a lively start which belied their lowly league position and they forged ahead in farcical circumstances in the 12th minute.

There was little danger with Paletta in possession in Milan's right-back position, but Donnarumma let the defender's firm backpass run away from him and he could only watch on as it rolled into the unguarded goal.

Milan's goalkeeper went some way to redeeming himself on the half-hour, clawing Ledian Memushaj's teasing cross away at the back post with Jean-Christophe Bahebeck poised to nod home from point-blank range.

The importance of that intervention was underlined four minutes prior to half-time as Milan levelled. Pescara failed to clear after Gerard Deulofeu led a counter and the ball rebounded kindly to Pasalic, who swivelled and thumped a volley past Vincenzo Fiorillo from eight yards.

Deulofeu was heavily involved again as Milan picked up where they left off early in the second period, his cutback finding Carlos Bacca but Cesare Bovo produced a heroic block.

Jose Sosa curled off target as Milan continued to press but Bovo's deflected free-kick flew narrowly wide to serve as a reminder of Pescara's threat.

Fiorillo - making his first Serie A start of the campaign - justified his inclusion with a fine double save from Pasalic and substitute Gianluca Lapadula 10 minutes from time.

As Milan poured forward frantically, Romagnoli headed against the post and only another desperate block - this time from Hugo Campagnaro to thwart Lapadula - preserved Pescara's draw as Milan were left to rue two points slipping from their grasp.

Key Opta stats:
- Pescara have benefitted from three own goals in this Serie A. Only Sampdoria (four) have more.
- Alessio Romagnoli played his 100th Serie A game.
- Milan have scored one goal in each of their last six away Serie A games.
- Jose Sosa has made 105 touches, his personal record in a single Serie A game.
- Carlos Bacca has been subbed off in eight of his last nine Serie A games started, including all the last four.