Playing his 50th A-League game during his side’s 4-1 win over Adelaide United on Thursday, Melbourne City midfielder Connor Metcalfe’s ongoing development looms as not just a bright spot for his club side, but also the Australian national setup.

Joining City as a pint-sized teen in 2014, a growth spurt during his time at the City Football Academy has seen the now 21-year-old Metcalfe develop into an out-and-out box-to-box midfielder and a mainstay in the club’s seemingly inevitable push for a maiden A-League title.

So far in 2020-21, the youngster has joined Jamie Maclaren, Craig Noone and Curtis Good as the only City outfielders to start all 21 of their games and, looking further afield, amongst Australian U23 outfielders only Central Coast Mariners’ defender Kye Rowles and Sydney FC fullback Joel King have played more minutes. 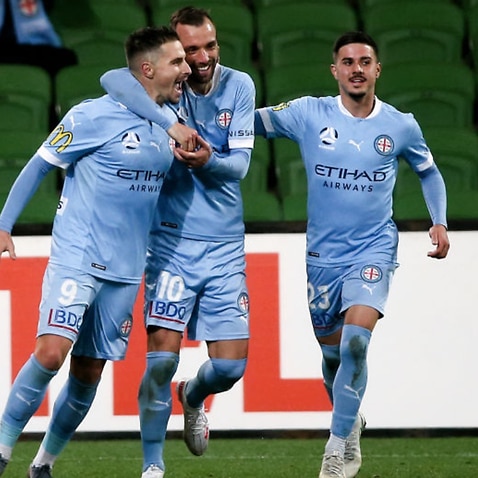 A member of the squad the last time they assembled prior to the A-League season, he is seemingly all but nailed on as a member of Graham Arnold’s squad for the Tokyo Olympics should they go ahead.

Metcalfe’s development and consistent performances in 2020-21, though, are increasingly making the prospect of a Socceroos call-up appear to be not a matter of if, but when.

“One of my goals at the start of the season was to try and play as many minutes as possible, Metcalfe told The World Game in March.

“I sort of see my role as a box-to-box midfielder. I have to help out defensively but also get in the box and try and score goals. I also need to help out in the build-up play, make forward runs, track back. Box-to-box.”

His work rate never in question, the Novocastrian-born midfielder has added a new string to his bow this campaign in the form of goals and creativity; finding the back of the net on five occasions and adding a further three assists.

Perfectly timing his run in behind his foe’s defences in the 15th minute of his side’s midweek 3-1 win over Brisbane Roar, Metcalfe demonstrated this newfound attacking touch with aplomb as he fired in a perfectly-placed left-foot drive beyond Jamie Young and into the bottom corner of the net.

“Connor’s really impressed me,” Des Buckingham, who was acting as a stand-in for an injured Patrick Kisnorbo in that win, said.

“From last season when he broke through and got his chance, at a similar time as Nate Atkinson did, he’s now regularly performing.

“He’s really started to develop his all-round game. He’s able to link play, he’s smart in pulling off players to open up space for when he’s seen Jamie Maclaren coming in and playing centrally to feet.

“And he’s added goals to his game with his runs in behind. So he’s just really started to develop that all-around part of his game - which is paying dividends at the moment.”

In his first year in charge of City’s senior team, Kisnorbo had a chance to observe Metcalfe’s development first-hand when he was undergoing his coaching apprenticeship within the club’s youth department.

Having put his side through a hellacious pre-season - the benefits of which have been on show as City blow sides out of the water in 2020-21- Kisnorbo says that Metcalfe is reaping the benefits of responding to that challenge but, in very on-brand fashion, added that a lot of work remains to be done.

“I think he’s challenged himself,” Kisnorbo said. “Connor was having a great year last year, came back and I don’t think he was in the right frame mentally, physically.

“He’s worked very hard to get to where he’s now got to. He’s put his head down and I’ve challenged him to improve every day. That’s very hard.

“Can he still do a lot more? So much more he can do.

“Someone isn’t a good player if they play two good games. It’s playing those 50s, those 100s, 200 games consistently at a level that the team wants and the coach but also at a level he gets noticed… not for the highs in terms of scoring but the actual ways he plays football.

“The determination, the sacrifice, the work ethic that he, along with everyone else has adapted this year.

“My job isn’t to make players ready for the national team, my job is to make Connor excel at the highest point he can get to. And if he gets noticed along his journey, that’s fantastic.

“That all comes down to him, though. It’s a lot of factors that have gone into the way that Connor is now but he still needs to do a lot, lot more.

“But, again, it’s a credit to him the way that he’s gone about it.”

Though now Kisnorbo’s assistant, Buckingham has his own pedigree in developing and assessing young players.

The one-time Wellington Phoenix caretaker has worked in the youth setups of Oxford United and Stoke City and has served as boss of New Zealand’s U20 and U23 sides.

At the 2019 FIFA U20 World Cup, Buckingham’s group of young Kiwis advanced to the Round of 16 and, during the group stages, defeated a Norway side featuring a certain Erling Haaland 2-0.

During this time with New Zealand’s junior national sides, the Oxford-born coach also observed first-hand the development of Liberato Cacace and Sarpreet Singh into highly sought after international starlets.

“For me, in terms of playing, [Metcalfe] needs to play consistently now in the A-League and keep backing up the performances he’s giving,” said Buckingham.

“I can only give you examples of players I’ve worked with - Libby Cacace and Sarpreet Singh at the Phoenix.

“Graham Arnold will select who he wants based on what he’s looking for [for international duty], but in terms of Connor playing here, it’s now about the consistency of performances for him.”