Paris Saint-Germain failed to capitalise on Lille dropping points as they suffered a shock 2-1 home defeat against relegation-threatened Nantes. However, it is being reported that PSG midfielder Angel Di Maria's family was the victim of a violent robbery.

Lille were held by Monaco earlier on Sunday and PSG looked set to replace them at the Ligue 1 summit once they found the breakthrough, but remarkably Nantes hit back in the second half to salvage a potentially massive win.

Breaking | RMC report that Angel di Maria & another PSG player were the victims of a home robbery, leading to the Argentine's rapid exit from the Parc des Princes mid-game. No further details for now.

Mauricio Pochettino: "There are situations outside of football that also explain the 2nd half. It is not an excuse but it brought about a reduction in energy. At half-time, we spoke about things other than football."

Alban Lafont produced a number of smart saves to keep PSG at bay before he was eventually beaten by Julian Draxler in the 42nd minute.

Given Nantes' lack of attacking threat in the first half, Draxler's goal looked as though it would be enough until Randal Kolo Muani pounced on Kylian Mbappe's mistake to restore parity and subsequently teed up Moses Simon to complete an unlikely turnaround.

PSG went close twice in quick succession with 11 minutes on the clock, as Lafont tipped Angel Di Maria's long-range effort over before gratefully seeing Marquinhos' header from the resulting corner skim the top of the net.

Nantes were convinced they were owed a penalty soon after but Presnel Kimpembe was not adjudged to have fouled Kolo Muani.

Mauricio Pochettino's men made the most of that let-off just before half-time, Draxler capitalising on a failed clearance and lashing a left-footed effort out of Lafont's reach.

Mbappe went close early in the second half yet shot wide after doing the hard part.

The France star was made to pay at the other end, his wayward pass going straight to Kolo Muani, who impressively jinked past Kimpembe and finished emphatically.

Kolo Muani was decisive again 19 minutes from time, latching onto a flick-on over the top before squaring to Simon for an easy finish – the goal allowed to stand following a lengthy VAR check for offside.

PSG piled the pressure on but their desperation yielded little, consigning them to successive home league defeats for the first time since November 2012. 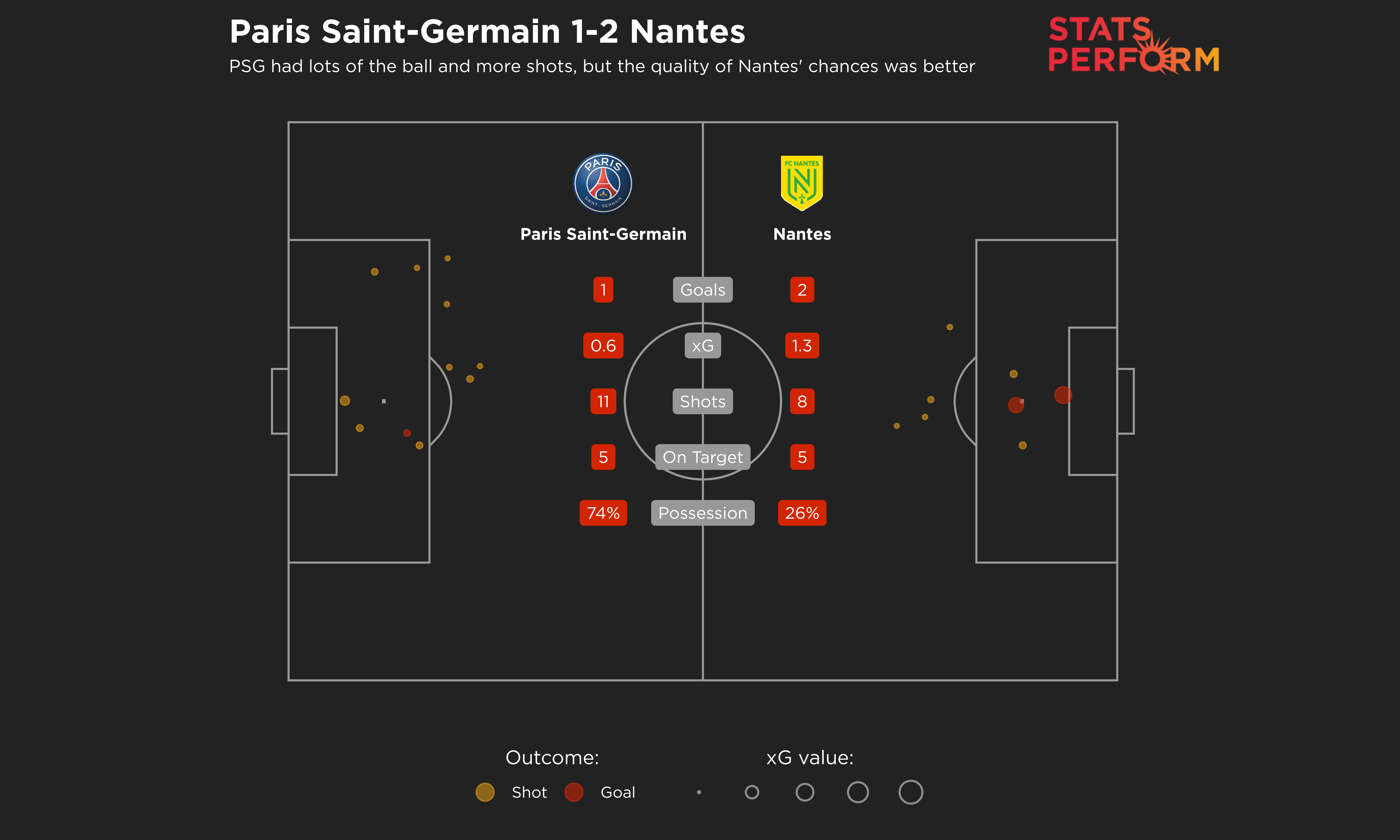 What does it mean? PSG lacking a ruthless streak as they continue to play catch-up

Lille's draw presented PSG with the perfect opportunity to put themselves back in control in the Ligue 1 title race, but they failed miserably here – only rock-bottom Dijon (two) have won fewer games than Nantes (five).

It was not as if the Parisians did not have the chances either, they just failed to make the most of them and their questionable defending was punished. Such slip-ups have been a habit of PSG's this term – after all, it was their seventh in Ligue 1 in 2020-21. If they want to retain the crown, they are running out of time to find consistency.

A night to forget for Mbappe

Before the match, you would have believed this was going to be all about Mbappe, who was making his 100th Ligue 1 appearance for PSG and chasing his century of top-flight goals, a tally he is two short of.

However, the 22-year-old finished the match with just two shots and was guilty of the woeful pass that released Kolo Muani for the equaliser.

While Kolo Muani and Simon may have done the damage in attack, it is fair to say Nantes' turnaround would not have happened without Lafont.

The goalkeeper made a string of saves in the first half – ending the game with four in total – and without them Les Canaris would have been on the end of a hiding. As it was, he kept them in the game and the forwards stuck to their end of the bargain in the second half.

PSG turn their attention to the Coupe de France on Wednesday as they look to deal a psychological blow to their Ligue 1 title rivals Lille. Nantes are not in action again until next Sunday, when they could take another step towards safety against Lorient, who are just one point above them in 17th.