Thomas Muller and Mats Hummels made their first appearances for Germany since November 2018 as Joachim Low's side were held to a 1-1 draw by Denmark in a Euro 2020 warm-up clash on Thursday (AEST).

The duo were among the experienced players removed from Low's thinking in March 2019 as he plotted a new path forward following Germany's group-stage exit at the 2018 World Cup.

But the pair have been trusted with helping Germany enjoy a successful tournament at the rescheduled Euros, which will be Low's final tournament in charge.

Die Mannschaft were comfortably the better side against Kasper Hjulmand's men, although they were denied a win when Yussuf Poulsen cancelled out Florian Neuhaus' opener 19 minutes from full-time at the Tivoli Stadion Tirol stadium in Austria. 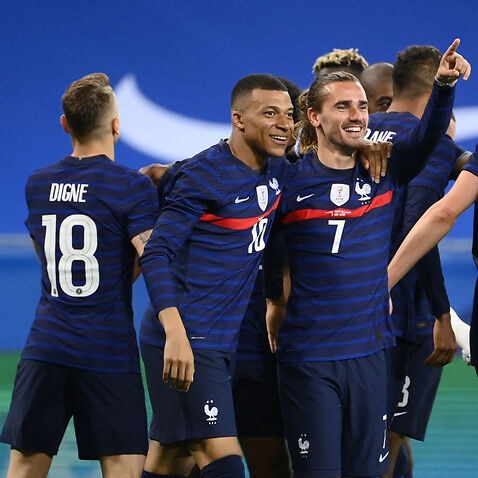 Germany started on the front foot, with Muller and Neuhaus forcing Kasper Schmeichel into saves inside the opening 15 minutes.

Leroy Sane spurned a glorious chance to put Low's men ahead shortly before the half-hour mark, the Bayern Munich forward blazing a half-volley well over from 12 yards.

Serge Gnabry went agonisingly close to breaking the deadlock moments before the interval when his curled effort from outside the penalty area crashed against the crossbar.

Denmark pulled level after a rare surge into the Germany half, Poulsen firing past Manuel Neuer after being released by Christian Eriksen.

Muller almost capped his return with the winning goal late on, but his flicked effort from Sane's cross bounced back off Schmeichel's post.

What does it mean? Germany need to sharpen up

With France and Portugal to come in a Group F, it is safe to say Germany will have more challenging games than this in the next few weeks.

While they looked sharp in attack, creating a host of opportunities, Low will be concerned that Denmark left Innsbruck having secured a draw courtesy of their only significant attack of the game.

Neuhaus was an impressive figure at the heart of Germany's midfield and marked his third start for his country with his second goal. Expect the Borussia Monchengladbach man to feature heavily in Low's thinking for a starting berth when the tournament kicks off.

Pace has never been Hummels' strong suit, but it will be of concern to Low that he was unable to keep up with Poulsen for the goal. France's Kylian Mbappe will be licking his lips at the prospect of facing the Borussia Dortmund man.

Germany host Latvia on Monday in the final warm-up game before their Euro 2020 campaign kicks off on June 15 against France. Denmark, meanwhile, take on Bosnia-Herzegovina a day earlier ahead of their first Group B clash against Finland on June 12.