Tottenham Hotspur boss Jose Mourinho says he is "not an idiot" and can see Christian Eriksen is a long way from his best, while adding he is "waiting for news" on the signing of Gedson Fernandes.

Eriksen has been heavily linked with a move to Inter Milan as his contract is due to expire at the end of the season and has only registered two goals and the same number of assists in 18 Premier League outings this season.

The Denmark international was criticised for his performance in the 1-0 home Premier League defeat to Liverpool on Saturday, with Mourinho asked if he had seen a lack of effort from the 27-year-old.

"If you ask me if this is the best Christian Eriksen, I have to be honest and say no," Mourinho said ahead of Wednesday's (AEDT) FA Cup third-round replay against Middlesbrough, where he is likely to start Eriksen.

"I also think the same as you think and probably what our fans thought in the game. He didn’t have a very good performance against Liverpool, I have to agree with that. 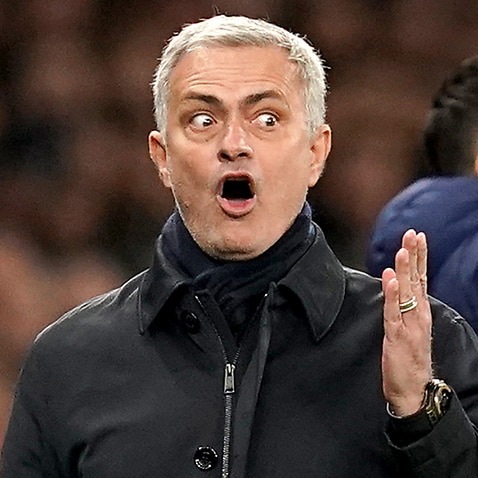 "If you ask me if I know the reasons, I'm not an idiot, I’ve been in football for many years. I know clearly that a player who is in this situation is not a player that even if he wants [to perform], it's normal that a player doesn’t perform at the highest level.

"I'm not blaming or criticising the player. I can also say that he is helping us in matches that he is playing with us.

"He has had positive performances and contributions for example the game against Olympiacos which was a fundamental match for us to qualify, same against Norwich he had a very good performance.

"We have very, very important injuries and every player we have has to be ready to help the team. We are not in a position to think anything different than that."

Amid reports Benfica midfielder Gedson Fernandes is undergoing a medical at Tottenham ahead of becoming Mourinho's first signing, the Spurs boss was reluctant to discuss the 21-year-old, but did say he was awaiting an update.

The Portugal international is expected to sign on an initial 18-month loan with an obligation for Spurs to buy him for £55 million (A$104 million) , having won the race with West Ham for the player's signature.

"I am waiting for news. News can come or not. I'm more worried about Middlesbrough than the market," Mourinho said of Fernandes.

"Even if you get a player you cannot play him in a replay. So in this moment I'm not interested in Gedson or any kind of player."

After being handed a Premier League debut against Liverpool on Sunday (AEDT), defender Japhet Tanganga is also poised to face Boro.

Asked if the 20-year-old was going to be out of contract having only signed a one-year deal ahead of the season, Mourinho indicated an extension had been done.

He said: "Do you think I would play him if his contract was expiring?"

Toby Alderweireld has started all 13 matches under Mourinho, who said the Belgium defender would be rested against Boro but, due to the club's injury list, he cannot afford to give any others a break as he would like to.