Harry Kane earned high praise from Jose Mourinho after the striker scored twice in the 3-0 win over Leicester City.

Jose Mourinho declared Harry Kane is "second to none" when it comes to strikers the Tottenham boss has worked with during his distinguished coaching career.

Kane continued his strong finish to the truncated 2019-20 season with two goals against Leicester City on Sunday, having also scored a brace in the midweek win away at Newcastle United.

The England international converted a one-on-one opportunity with his left foot to double the lead over the Foxes, then curled home a glorious effort from long range to wrap up a 3-0 triumph before half-time. 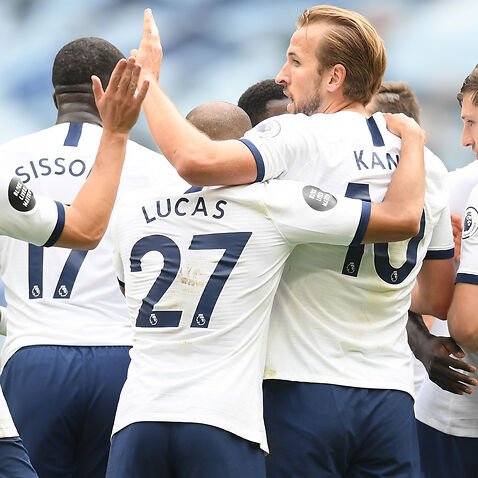 Mourinho admits Spurs are "lucky" to have someone of such quality to lead the line – and made clear it is up to the rest of the team to raise their standards and help their talismanic frontman.

Asked on Sky Sports if the 26-year-old is one of the best strikers he has coached, Mourinho replied: "Of course he is.

"It's difficult for me to compare strikers, I had almost in every club some of the best, but Harry is second to none. Just different – different qualities – but as a striker, as a goalscorer, as a team player, as a leader, I think he is fantastic.

"It's difficult to make him better – the better the team is, the better he can be. I think it depends more on us, more on the team than himself.

"He's an amazing professional who works very, very well. He cannot work better than what he does during the week, he's a fantastic striker and I'm so happy. Tottenham are so lucky to have him."

Kane has now scored 16 goals in 14 games against Leicester, a club where he spent a loan spell during the early phase of his career.

A hamstring injury seemed set to ruin the second half of his campaign but the delay caused by the coronavirus pandemic has given both him and Spurs – who are up to sixth in the table – an unexpected chance to finish strongly.

"I said before this game that it [the break] gave me a chance to rest and recover," Kane told Sky Sports.

"I did a lot of work outside of the club to feel good, and I'm feeling probably as good as I have done for the past four or five years now.

"Obviously it's good to be finishing strongly. We know we've got one more game now – hopefully we can win and I can score a couple more."

He added: "I keep performing, week in and week out. I work hard for the team and score goals, that's all I can do. I like to do my talking on the pitch and that's what we've done today."

With the aim of qualifying for next season's Europa League, Tottenham complete their league fixtures with a trip to Selhurst Park to play Crystal Palace next Sunday.