Following a scoreless first half, Mosquera opened the scoring at the Estadio Polideportivo de Pueblo Nuevo in the 50th minute on Tuesday.

Carlos Cermeno put in a dangerous cross and Mosquera was on hand to guide the ball past Pumas goalkeeper Alejandro Palacios to give the Venezuelans the advantage.

However, Mosquera was lucky to still be on the pitch following a high boot on Alejandro Castro in the first half, which left the Mexican with a big mark on his chest. 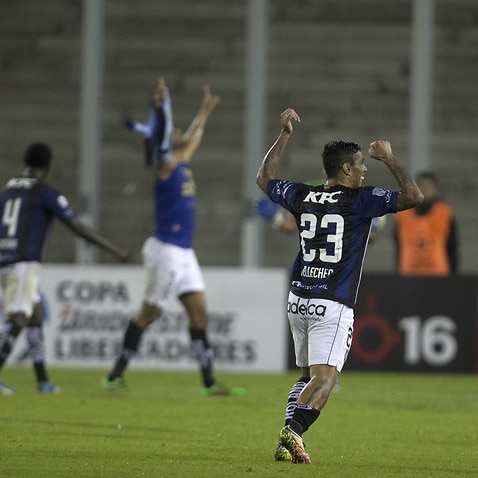 It was the away side who were eventually reduced to 10 men after Marcelo Alatorre was shown a second yellow card in the 69th minute.

Tachira held on for the slender win, which gives them the upper hand heading into the return leg in Mexico next week, with the winner set to face either Independiente del Valle or River Plate.

Meanwhile, Huracan were held to a 0-0 draw at home against Colombian outfit Atletico Nacional in their round-of-16 tie.

Both sides played a cautious game with few opportunities created throughout the contest at the Estadio Tomas Adolfo Duco in Buenos Aires.

The return leg takes place next week in Medellin, with the winner to play in the quarter-finals against Gremio or Rosario Central.