Australia midfielder Aaron Mooy starred with a crucial goal for Huddersfield Town in the Championship as they maintained their push for promotion with a 3-0 win over Norwich City.

Mooy's strike, together with goals from Elias Kachunga and Nahki Wells, took them to third spot - one ahead of fourth-placed Reading.

The Socceroos star instigated his goal with slick passing down the left wing before receiving a backheel from team-mate Wells inside the box, finishing with a low strike.

The victory breaks a two-match losing streak and sees the club one spot outside the automatic promotion cut-off, with the next four teams involved in a play-off and the winner to play in the lucrative Premier League next season.

"There is a long way to go but this is a big step towards a play-off position and that's an unbelievable achievement for this club," Huddersfield coach David Wagner said.

"We are still the small dog, Huddersfield Town. Look at our budget. We know where we have come from and we know how hard it is to win in the Championship.

"We were poor against Bristol City but you try to learn and get better and we were unlucky to lose against Burton. Tonight we showed what we are capable of."

Newcastle United returned to the top of the Championship with a controversial 1-0 victory against Jackson Irvine's Burton Albion.

Newcastle thought they had opened the scoring when Matt Ritchie converted a penalty, but referee Keith Stroud blew his whistle having spotted an apparent encroachment before the spot kick was taken.

In bizarre circumstances, however, he disallowed the goal rather than order a re-take - much to the bewilderment of Newcastle and manager Rafa Benitez.

Ritchie finally did open the scoring with a thumping strike in the 68th minute which means, with six games remaining, Newcastle have 84 points - one more than second-placed Brighton & Hove Albion. 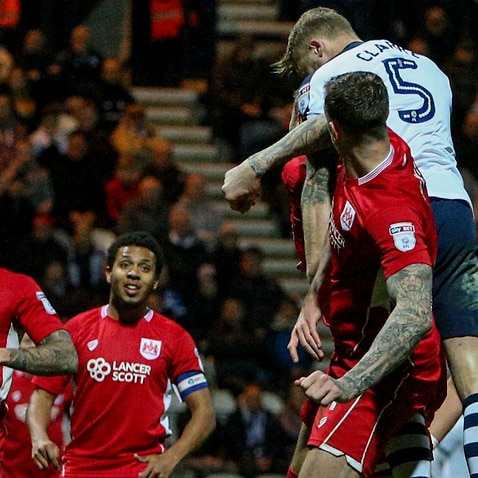 All goes wrong for Wright on Preston return