Basketball legend Michael Jordan has joined the chorus of sporting personalities from across the globe to address the death of George Floyd.

Jordan released a statement on Monday (AEST) as often-violent protests spread in cities across the US after Floyd, a black man shown on video gasping for breath while handcuffed as a white policeman knelt on his neck in Minneapolis, died.

The incident has triggered demands for change and justice over police brutality and racism.

"I am deeply saddened, truly pained and plain angry," wrote Jordan, as he called for continued peaceful protests.

"I see and feel everyone's pain, outrage and frustration.

"I stand with those who are calling out the ingrained racism and violence toward people of colour in our country.

"We have had enough.

"I don't have the answers but our collective voices show strength and the inability to be divided by others."

Borussia Dortmund's Sancho removed his jersey after a goal to reveal a T-shirt with the handwritten message "Justice for George Floyd". 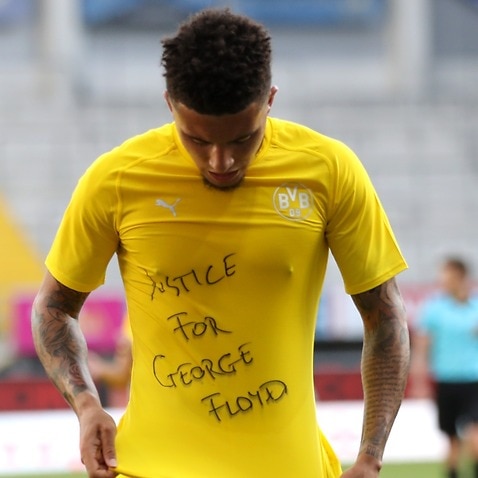 His teammate Hakimi followed the example when he scored to reveal the same message.

"We shouldn't fear speaking out for what's right, we have to come together as one & fight for justice. We are stronger together! #JusticeForGeorgeFloyd," Sancho posted on Instagram.

"No explanation needed," Gladbach said on Twitter with a picture of Thuram kneeling.

McKennie wore an armband with the handwritten message "Justice for George" around his left arm.

LeBron James was among the NBA stars to speak out in recent days on social media while other American sports people, including former NFL quarterback Colin Kaepernick - who was dumped from the league in 2016 for protesting racial injustice by kneeling during the national anthem before games - did likewise.

Meanwhile tennis star Serena Williams tweeted Nike's powerful 'Don't Do It' video along with the message: "Don't pretend there's not a problem in America".