Late-blooming Nikita Rukavytsya has all but sealed a Socceroos recall, with Australia assistant coach Rene Meulensteen describing his goal-scoring form as “phenomenal “.

At 33, the former Perth Glory and Western Sydney Wanderers striker continues to defy the ageing process at Maccabi Haifa - bagging seven goals in five appearances so far this season, plus three assists.

And that’s off the back of last season’s Israel Premier League Golden Boot when he fired in 22 goals in 36 games.

Dutchman Meulensteen had Ukraine-born Rukavytsya under his wing during his brief spell in charge of Maccabi Haifa back in 2016, and flew to Israel in February to gauge the forward’s desire to return to the international arena after a two-year absence. 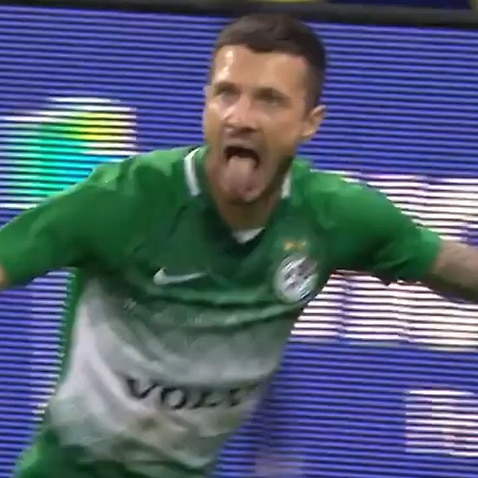 But for the cancellation of March’s FIFA World Cup qualifiers against Kuwait and Nepal due to the coronavirus, Meulensteen confirmed Rukavytsya might already have picked up his 19th cap.

“He’s on a phenomenal run, and has been for a while now,” said the Manchester-based former assistant to Sir Alex Ferguson at Old Trafford.

“He’s a huge threat with the speed he possesses and the runs he makes.

“He’s at a club with high expectations and in his position you need to score almost every week, which is what he’s pretty much been doing over the last season or so.

“Some players explode on the scene quite young but Niki has found his peak in the latter stages of his career, and is using his wealth of experience to his advantage.”

Australia are working to secure a friendly in Europe during the November FIFA window, and Rukavytsya is likely to be front and centre of selection calculations.

The ex-FC Twente, Mainz and FSV Frankfurt flier will be in London next Friday (AEST) for Maccabi’s UEFA Europa League playoff against Tottenham.

And after scoring and assisting to see his team past Russia’s SK Rostov 2-1 during the week, Meulensteen believes he poses a threat to Jose Mourinho’s side.

“The way he’s playing, with his ability to make those runs in behind defences, I think he can cause Spurs some problems,” said Meulensteen.

“When I was at Haifa, he began slowly after arriving from Beitar Jerusalem but you could see the potential he had to hurt teams because he was so quick.

“It can take time to settle and now he’s a senior player in that squad and is doing brilliantly. He’s at a great club with fantastic fans and a great stadium.

“I’m very happy for him - Niki is a very quiet boy. That’s his nature but when I saw him he was very upbeat and happy.

“Right now we need to keep monitoring him and when we have something on the cards - hopefully in November - we’ll take another look.

“The way he’s playing he’ll be hard to ignore because goals are hard to come by.

“With Australia, it’s variety you need in the front third - and Niki brings you something different and would be really effective against teams that leave a lot of space in behind the back four.

“For that type of scenario he’s the ideal man.”

Rukavytsya was part of Australia’s 2010 World Cup squad in South Africa, and was among the final four players culled before the Socceroos’ 2018 World Cup campaign in Russia.