Messi, 33, has been linked with an exit amid reports the Barca captain is ready to quit Camp Nou once his contract expires in 2021.

The six-time Ballon d'Or winner has reportedly halted contract negotiations due to his frustrations with Barca – who are on track to be dethroned by bitter rivals Real Madrid in La Liga this season.

But Bartomeu is confident all-time leading goalscorer Messi will retire at the club after making his debut in 2004.

"We have talked, we are talking and we will talk to Messi," Bartomeu told TV3.

"He wants to finish his career here. We will renew it [contract] for sure, I have no doubt that he will continue here." 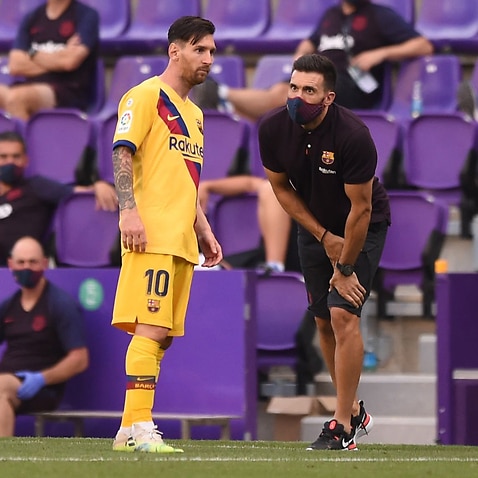 Messi set up Arturo Vidal for the match-winning goal in Sunday's (AEST) 1-0 victory at Real Valladolid.

It was Messi's 20th assist of the La Liga season as he reached a notable double in the league, becoming the first player since Thierry Henry in 2002-03 to score and create 20-plus goals in a single campaign across Europe's top five leagues.

Setien replaced Ernesto Valverde in January but the former Real Betis boss has struggled to convince, with Barca one point behind leaders Madrid – who can restore their four-point lead atop the table against Getafe on Tuesday (AEST).

Asked about Setien, Bartomeu said: "Quique Setien will be on the team for the Champions League. The will is for him to be the coach next season, our intention is to fulfil the contracts."

Barca great Xavi had been linked to the hot seat prior to Setien's appointment and before signing a new contract with Qatari outfit Al-Sadd.

"Xavi will be a coach for Barca sooner or later but now we are not looking for a coach, we are with Quique," Bartomeu added.