Barcelona picked up a first win in five LaLiga games in Saturday's clash with Real Betis, Lionel Messi making a big impact from the bench

Lionel Messi scored twice and played a key part in another goal in Barcelona's 5-2 LaLiga win over 10-man Real Betis after being left out of Ronald Koeman's starting line-up for the first time.

Barca assistant Alfred Schreuder put the absence of Messi, who has struggled for form this season, down to a lack of fitness as he started a league game on the bench for the first time since September 2019.

The mercurial forward was brought on at half-time with the game poised at 1-1 after Ousmane Dembele's strike was cancelled out by Barca academy product Antonio Sanabria, either side of an Antoine Griezmann penalty miss. Messi paved the way for Griezmann's goal 194 seconds into the second half, then scored a penalty after Aissa Mandi was dismissed for handling the ball on the line and doubled his tally late on to kill off Betis following Loren Moron's strike.

Pedri then capped a much-improved display for Koeman's side with a fifth goal late on as they secured a first league win in five on Saturday.

Barca had made their worst start to a league season after six games in the three-points-per-win era but made a bright start against Betis, with Griezmann firing wide from 12 yards and Fati curling a shot off target.

However, the breakthrough came 22 minutes in, as Dembele brought the ball inside Alex Moreno and beat Claudio Bravo, who got a touch to the shot but could not keep it out.

Griezmann then hit the post and was denied by Bravo from the spot after Mandi fouled Fati, and Betis were level when Sanabria guided in Cristian Tello's cross on the brink of half-time.

Messi was brought on for Fati at the break and had an instant impact, smartly dummying Jordi Alba's cross for Griezmann to slot into an unguarded net behind him. 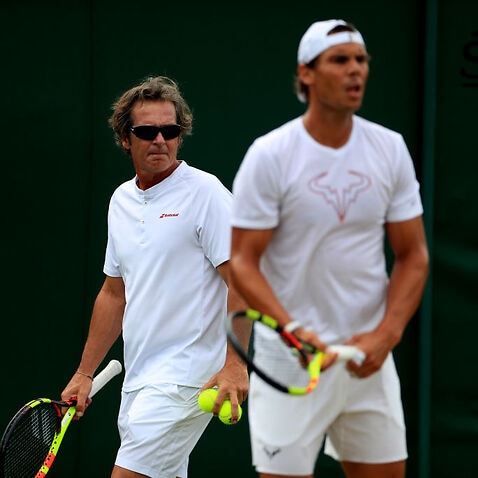 After a lengthy VAR check, Mandi was deemed to have blocked Dembele's shot on the line with his arm and Messi had no trouble converting his fourth penalty of the season.

Moron gave the visitors a lifeline by blasting a shot past Ter Stegen after Gerard Pique flicked the ball into his path, but that proved nothing more than a consolation thanks to Messi's powerful left-footed drive and Pedri's close-range finish.

What does it mean? Messi makes up for lost time

Leaving players out for fitness reasons is nothing new, of course, but it still came as a big surprise to see Messi out of the starting line-up.

He had failed to score from his last 31 shots from open play in all competitions before today, but put an end to that run with an 82nd-minute drive.

That came after playing a key part in Barca's second goal and scoring from the spot to the game away from Betis, who had six shots on target and perhaps could have taken a point on another day.

It has been a long time coming but Dembele finally seems to have found his rhythm at Barcelona following a succession of layoffs.

His first-half strike, from one of only two shots he managed during his 66 minutes on the field, was well taken and makes it three goals in six matches -more than he scored in 26 games last season.

Griezmann missed three big chances in the first half, including another spot-kick, though he did at least manage to find a way through in an improved second period all-round for Barca - thanks largely to Messi.

Having also set up Dembele's strike, he both scored and assisted in a Barcelona game for the first time in 2020.

Barcelona travel to Atletico Madrid on their return to LaLiga action two weeks today, while Betis' next outing is away to Athletic Bilbao on November 23.