The big question surrounding the extravagantly gifted Kylian Mbappe is not whether he will be proclaimed the world's finest footballer but if he already is.

The French striker took his game to a new level by playing a key role in Paris Saint-Germain's 4-1 demolition job on Barcelona in the first leg of the round of 16 tie in the UEFA Champions League.

Barca's forlorn superstar Lionel Messi could only look on helplessly as the young striker stole the show that further enhanced his image as the next king of football.

Mbappe was in blistering form all night and tormented Barcelona with his pace, power and dribbling.

He first brought the house down with an incredible example of how to create space out of nothing before smashing the ball in from close range. 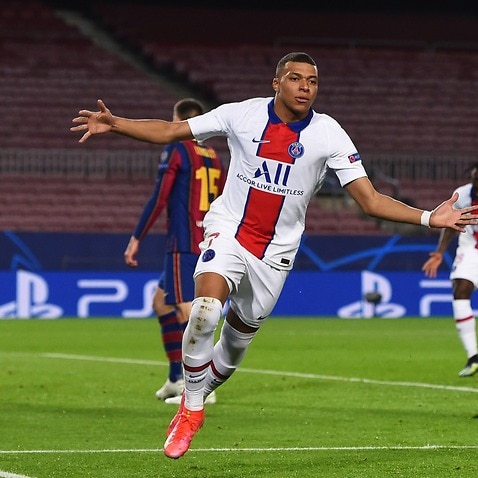 He then was in the right place at the right time to steer the ball home from a defensive rebound before he completed a brilliant night's work with a sumptuous first-time finish to the far post.

It was the kind of exhilarating performance that made it hard for anyone to remember that he is just 22.

Surely, it is only a matter of time before he is officially - if there is such a thing in a team game - proclaimed as better than Messi and Cristiano Ronaldo.

Some would suggest that he already is the best, because Messi and Ronaldo are not young any more and their master classes are becoming less frequent.

Messi is 33 and Ronaldo is 36. Both have seen their best years and it will not be long now before they will ride into the sunset after entertaining the world with their extraordinary skills that captivated the football family for a decade.

Mbappe has achieved more than either Messi or Ronaldo did at his age.

He was a world champion at 19 and he already has helped himself to four French championships with Monaco and PSG. Who knows what more mayhem he could unleash by the time he is in his 30s?

What the son of a Cameroonian father and Algerian mother could achieve will depend largely on his immediate future.

The striker is being closed linked to Real Madrid and one feels that his game will go to yet another level if he joins the Spanish giants and call the Bernabeu stadium his home ground.

The gallery of the historic arena that is being refurbished are accustomed to the creme de la creme in terms of football excellence.

No expense has ever been spared in the club's efforts to build super teams that not only win the major trophies but also do it in style.

Mbappe's growing reputation has reached such a level that he and Real Madrid seem like they are just made for each other.