The chaos-riddled restart preparations of Melbourne’s three A-League teams have hit a new hurdle, with all players and staff locked down today in their western Sydney hotel after a coronavirus scare.

A Melbourne Victory player exhibited COVID-19-like symptoms on arrival in NSW on Saturday and was tested yesterday for the virus.

The test results came back negative, but health protocols have dictated that staff and players from Victory, Melbourne City and Western United were all today retested.

If those tests are all clear the teams will be allowed to resume training on Tuesday.

While awaiting clearance they are consigned to their hotel rooms. 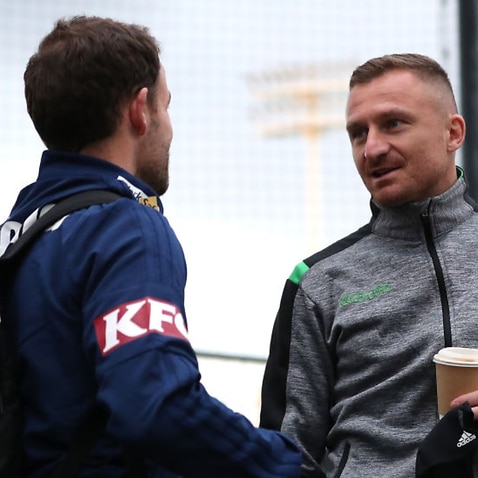 A-League chief Greg O’Rourke said they would be retested again in midweek and then again 11 days into their 14-day quarantine period before the resumption of action, as per a revised draw due to be released imminently.

“There was always going to be three cycles of tests,” said O’Rourke. “Nobody is currently showing any symptoms.

“One player got tested (earlier) and was negative.

“As as soon as the (latest mass) tests come in they’ll be able to start training.

“We’re re-tweaking the draw which will probably extend out by six calendar days to accommodate Western United who have six games remaining.”

This latest hiccup is the last thing A-League chiefs wanted after the debacle of two previous attempts last week to depart Melbourne ahead of NSW closing its border to Victorians. Their first attempt was thwarted by fog at their intended destination in Canberra and their second scuppered by a change of quarantine regulations in the ACT. On both occasions frustrated players were forced to turn back after making it only as far as Tullamarine Airport.

The teams will train at the nearby venues of Valentine Park and Marconi Stadium.

O’Rourke insisted all three Melbourne clubs, whose training schedules have been in disarray for a week or more, would not be at a significant disadvantage entering a hectic period of matches over the next five to six weeks.

“The redraw will allow them to play over an extended period of time,” he said. “They’ll have a game then four of five days before the next one. We won’t be cramming them,” he stressed.

Victory have five games left and City, who are second on the table, have just three.