Australian midfielder Beattie Goad has made into German football and is now eyeing a spot in the Matildas.

Beattie joined newly promoted Frauen-Bundesliga side SV Meppen two months ago and is enjoying her move to Europe. The 23-year-old, a former teenage W-League prodigy, spent four years in the United States with Stanford University before her transfer to SVM.

After representing Australia at youth level, Goad is eager to break into the senior national team.

“It is one of my goals,” she told SBS The World Game.

“It was definitely more at the forefront of my mind when I was in Australia and in the youth team and the Under-20s, and thinking about how I could get into the national team.

“When I went to Stanford and played in the US I think my mindset changed, I was more focused on growing as a person academically and athletically rather than see myself trying to play for Australia.

“But now that’s definitely hitting back home that I do want to see myself play for Australia again. Who doesn’t want to play for their country?”

Beattie broke into the W-League in 2013 with Melbourne Victory as a talented 16-year-old while still in Year 11 at high school, and made history as the club’s youngest goal-scorer and the youngest ever to play in a grand final. She then headed to the US in 2016 and studied human biology at Stanford.

Now the attacking midfielder is relishing life and football in Germany, but admits it was a difficult transition with the uncertainty caused by the Coronavirus.

“The team is really nice and everyone is hard-working, so it’s a really good environment. And Germany itself has been good.

“The culture is…. It’s just funny having grown up in Australia, then spent four years in the US and this culture in Germany is very different. 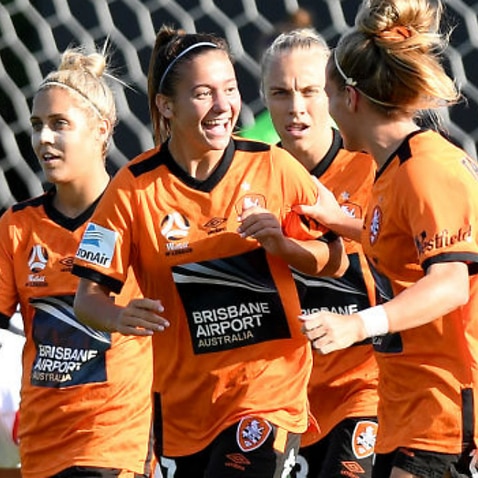 “I definitely wanted to experience Europe and European soccer. It was a very complicated process, because in November last year I had made the decision to go to Europe.

“I started talking to people, then in March I was talking to several clubs and then COVID happened. So I thought I wouldn’t be able to come at all, so I started applying for full-time jobs in the US.

“And then some friends suggested I give Europe a try, and the Meppen coach texted me, so I changed my mindset and decided to just do it. The decision was like ripping off a band-aid, but I’m glad I made that choice.”

The 2020-2021 German season kicked off last month and SV Meppen has notched two draws from and two defeats from its first four matches.

Goad says the club’s goal is to remain in the top flight, competing against the likes of giants Bayern Munich and Wolfsburg, and avoid relegation.

“It is exciting, Meppen just got promoted to the Bundesliga,” the former Young Matilda said.

“I came from, I can say in the most modest way, Stanford is a pretty strong team in our conference in the US. So coming here is the complete flip-side of things, being the underdog in every game.

“We’re going in against teams like Wolfsburg last week with nothing really to lose. I’ve actually really enjoyed being the underdog against all the big teams.

“Against the top teams, the standard is probably a little bit better than in the US. But against some others, it’s on par. Technically… it’s just a very different game.

“In the US it’s much more athletic, while here it’s more technical and not as physical. Our goal this season is more like staying in the league and proving ourselves.

“Definitely being the lower half of the ladder and fighting hard against the top teams. I definitely think we can stay in the league and show ourselves.”