Matilda stars Sam Kerr and Ellie Carpenter could end up in a women's UEFA Champions League final showdown after the draw for the last-eight and last-four stages kept their European powerhouse sides apart.

Australia captain Kerr's Chelsea have been drawn with last year's finalists and two-time winners Wolfsburg in the quarter-finals and, should the English champions win that, will then face the winner of the Bayern Munich-Rosengard tie in the semis.

Carpenter, who's been starring for the champions Lyon, is set for a blockbuster all-French quarter-final with their big rivals Paris St Germain, although PSG must first complete their last-16 mission against Sparta Prague who they lead 5-0 after the first leg. 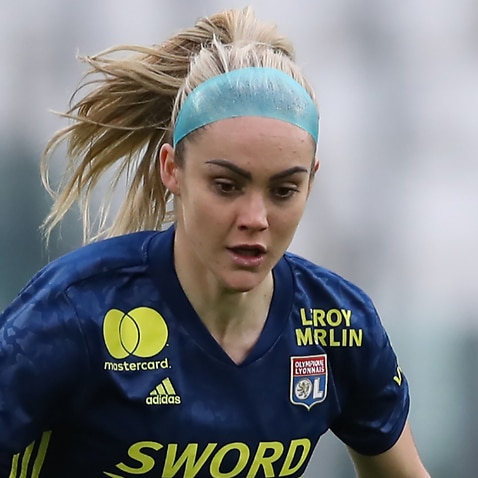 If Lyon negotiate that hurdle, they will then face either Manchester City or Spanish league leaders Barcelona in the semi-finals as they bid for a record-breaking sixth straight Champions League title.

It is, of course, a long way off but it sets up the tantalising possibility that the two top Matildas in world football could meet in the final in Gothenburg's Ullevi Stadium on May 16.

The pair have been in fine form, Kerr having scored 12 WSL goals for Chelsea this season while Carpenter has been a stand-out fullback and fan favourite at Lyon.

Both have big weekends ahead too with Kerr favourite to lift another piece of silverware with the Blues on Sunday in the FA Women's League Cup final against Bristol City.

On Saturday night, Lyon's match against PSG - which has now taken on even more significance as a dress rehearsal for their likely Champions League meeting - looks set to be a French title decider.

Carpenter can't wait for the PSG showdown because the team from the capital have this season thrown down a potentially era-changing challenge to Lyon, who've become arguably the world's finest sporting team with their remarkable soccer dominance.

Last November, PSG handed them a 1-0 defeat, ending the champions' 79-game unbeaten streak which had stretched back nearly four years.

It also put PSG top of the league, leaving Lyon facing a genuine threat after winning the last 14 French titles.

It left Carpenter admitting to Lyon's in-house TV station before the draw took place that they were after revenge.

"As soon as we lost them to last year, I think all eyes were on this match in March," said the 20-year-old.

"We know what's at stake and we know we need to win. I think we all just want to play that game.

"Definitely, there will be some revenge."

"March is a big month for us. I think we're ready for it. I'm ready, and as a team we're ready as well.

"We know every game we have to win and we want to win. I think it's just installed in you mentally.

"I think it's so important and such a special thing that Lyon has - that winning mentality."