The Matildas are yet to pick up a win under Tony Gustavsson but their new coach is confident his charges are heading in the right direction ahead of another stern test against Sweden.

Australia lost to Germany 5-2 and the Netherlands 5-0 in their opening two games under Gustavsson.

While the Matildas were much-improved, bar a disastrous 15 minutes in their 3-2 loss to Denmark, they'll need to find another gear to beat world No.5 Sweden who they'll also play in the group stage at the Olympics.

"Obviously (a win) can help the belief but I do think there is a huge belief in there (already)," Gustavsson told reporters. "I think that we are on an upward trajectory to always get one day better.

"But they were also very upset, as I am, that we didn't win that game

"If you look at the stats and the performance we should win a game like that, but that also (taught) us that, you know what, games are won or lost inside the 18 (yard box)."

Despite the testing start, Gustavsson emphasised both he and his players preferred facing top opposition to chasing easier wins.

"The last thing these players want to do is just play a simple game to get some false confidence," Gustavsson said.

"And remember also that a lot of our players are playing against the best at club land.

"To go into the international team and play some some easier games just to gain some confidence, I'm not sure that's going to be the true confidence that we need.

"We need to learn and grow as a team and be strong in that."

Gustavsson has until the end of June to submit his Olympics squad.

He said he was keen to build "consistency and cohesion", hinting he would deploy a strong team against Sweden while also testing out some players.

The likes of Steph Catley and Ellie Carpenter only met Gustavsson in person this window, after injuries, COVID-19 outbreaks and travel restrictions hampered his previous squad selection. 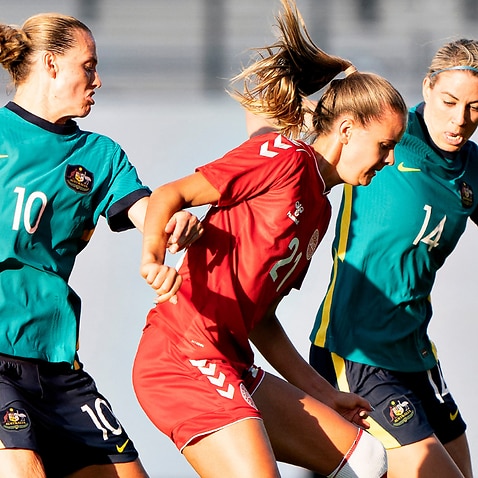 Wednesday's game, which kicks off at at 2.45am AEST at Kalmar Arena, should see skipper Sam Kerr go head-to-head with her Chelsea captain Magdalena Eriksson.

Australia have just one win from 11 attempts against the Swedes, along with three draws and seven losses.