Sam Kerr scored her first Women's Champions League goal in her debut in the competition as Chelsea beat Benfica 3-0 to wrap up progression to the round of 16.

Kerr made her Champions League debut in the second leg of the round of 32 clash, played at Kingsmeadow, and after fellow striker Beth England opened the scoring in the 28th minute, the Australian made her mark in the 65th.

Norwegian attacker Guro Reiten threaded a superb ball through for Kerr, who finished with aplomb.

The goal was Kerr's fifth in her past three starts for Chelsea.

Kerr was substituted three minutes after her goal, and England rounded out the win in stoppage time as the hosts closed out the tie 8-0 on aggregate.

Blues star Kerr scored a domestic league hat-trick against West Ham, then was an unused substitute in the first leg against Benfica, before burying the game's only goal in a 1-0 league win over Brighton. 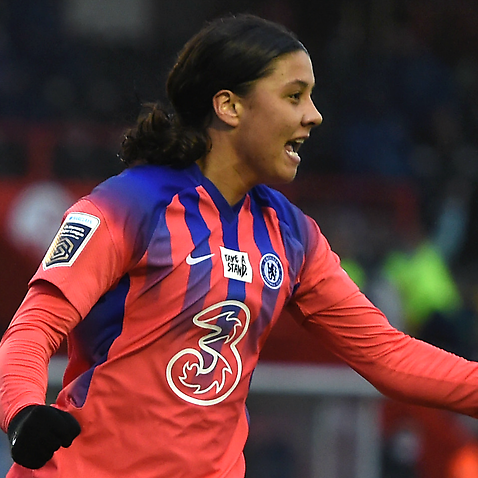 Youngster Indiah-Paige Riley, who is eligible to be capped by both Australia and New Zealand, who will have the chance to play in the round of 16, started and played 62 minutes for Fortuna Hjorring in their 3-2 win over Pormuje (6-2 win on aggregate).

Amy Harrison and Kyah Simon's PSV Eindhoven were knocked out by Barcelona, losing 4-1 on Thursday and 8-2 on aggregate, with Harrison playing 66 minutes.