By Tim Vickery
Share
Argentina coach Gerardo Martino must surely be wondering about the validity of his plan of action after a historic 2-0 defeat at home to Ecuador in the first round of World Cup qualification.
Martino had spent his first year in charge building up to this moment. During friendlies and the recent Copa America he was always anxious to stress that he was looking to consolidate an idea of play. 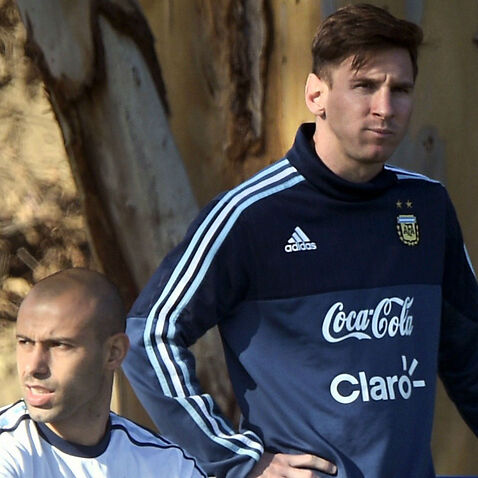 One round into the marathon Russia 2018 campaign he may already be having a rethink. The problem is not a new one. Essentially the last three Argentina coaches have wrestled with something similar, the quest to construct a side built on a framework of 4-3-3.
There are two reasons for this; one is the opportunity it gives to take advantage of Argentina’s deep attacking resources.
The second, stressed most firmly by Sergio Batista in 2011, has been the desire to replicate the system in which Lionel Messi has flourished so beautifully on the other side of the Atlantic.  Batista was open about his desire to build a ‘Buenos Aires’ Barcelona, an experiment he was forced to abandon after some poor results during the 2011 Copa America.
He was succeeded by Alejandro Sabella, who qualified for Brazil 2014 with a front trio of Messi, Sergio Aguero and Gonzalo Higuain, plus Angel Di Maria as part of the midfield three.  Martino tightened things up a little bit by choosing Aguero over Higuain and moving Di Maria into the front line.
In the Copa America, though, he went bold by replacing a mixed midfielder with the more creative Javier Pastore, and this was the model of the team that lost to Ecuador.
Messi, of course, was missing, and Aguero soon pulled up injured, to be replaced by the local hero Carlos Tevez.
The centre forward was flanked by Di Maria and the highly promising Angel Correa, with Pastore behind them, together with Lucas Biglia as a mixed midfielder and Javier Mascherano holding. Ironically enough, it was Mascherano who came closest to a goal.
It is a formidable collection of firepower. But it does come with risks.  A team is one living, breathing unit, and having so many forward thinking players inevitably puts a strain on the defensive unit, especially when Argentina’s current crop of defenders are so lacking in pace.
During 2014 qualification, coach Sabella confessed that there were times when his team was under attack when all he could do was shut his eyes and pray. He based his faith on the understanding that, in a tit-for-tat game, his strikers would tip the balance Argentina’s way. Come the World Cup his individual stars were clearly running on empty at the end of the club season.
Pragmatically, he fielded much more cautious teams and relied on the occasional flash of Messi genius to carry the team through to the final.
But even with all the stars present, there is still a problem – as became very clear in the final of the Copa America against Chile. Fearing that their lack of speed will be exposed, Argentina’s defensive line can hang deep, very different from the Barcelona high line press.
This means that the area covered by Messi is much increased. He has to forage far deeper, and is picking up the ball much further from the opposing goal, surely part of the explanation for his end of season burn out.
Last month late goals from Messi and Aguero secured a 2-2 draw in a warm up friendly against Mexico.
“I understand,” said Martino after the match, “that we are leaving ourselves open to the counter-attack.”  Without Messi and Aguero, but with the same problems, there was no way back against Ecuador.

Argentina’s passing was rarely crisp enough to trouble Ecuador. As Martino said after the game, “the fact that we were poor on the ball provoked all of the problems we had without the ball.  When we are unable to circulate the ball, to pass forward and conclude our moves, then the opponent keep having space in which to counter-attack, and they have players who are very good in one against one situations.”

Indeed. Not for the first time Jefferson Montero gave right back Facundo Roncaglia a torrid evening, and the match was effectively won by the dominance on the other flank of Luis Antonio Valencia over Emmanuel Mas.
But should Argentina’s full backs have been left so exposed?  With Messi out of action, should Martino have planned the game differently?
“It’s very difficult if the absence of one player, even if he is the best in the world, forces us to change the idea,” Martino said after the game.
“We have players to carry out the kind of game that we are looking to play, and changing would force us to plant doubt in the mind of the players.”
Whether he likes it or not, after losing at home to Ecuador that doubt is surely there. Argentina’s players will be wondering whether they can continue with an expansive gameplan, or whether it might be better to pack midfield.
Tuesday’s game away to Paraguay will be an interesting test, and the next match will be even more so.
In November’s third round Argentina are at home to Brazil, which will have Neymar back from suspension. For all the current problems of the Brazil side, they can counter-attack with speed and skill.
An Argentina performance such as the one against Ecuador would play right into their hands. As contact with the old enemy approaches, we will soon find out the extent to which Gerardo Martino will stay loyal to his idea of play.