Sydney FC coach Steve Corica heaped praise on ‘marathon man’ Rhyan Grant for an inspiring performance in the Sky Blues’ 2-1 win over Melbourne Victory, describing the tireless full-back as a key man who epitomises the spirit of the club.

It was Grant’s 200th match for his one and only club after he made his professional debut in 2008.

Corica said he was in awe of the attacking player who had played a full game for Australia against Jordan in the 2022 FIFA World Cup qualifier in Amman two and a half days earlier.

Grant’s importance to the team’s functionality was illustrated when his club upgraded his plane ticket from Jordan to Sydney to first class and he was picked in the starting line-up despite returning to the country on Saturday morning and not getting to train with the boys on the eve of the match.

“I really think Rhyan has gone to another level this season,” Corica said after Sydney’s come-from-behind victory. 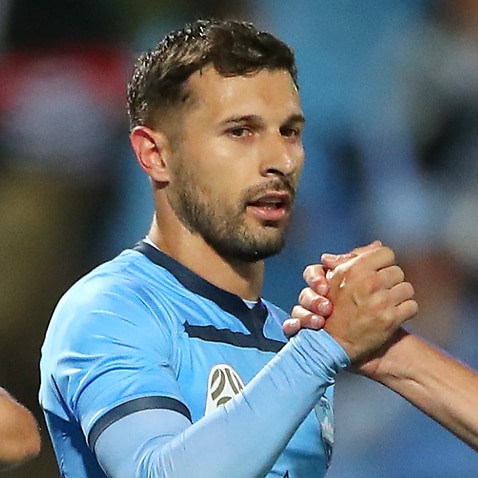 “He had 90 minutes the other day in Jordan and another 90 minutes today and came up with an assist.

“He works very hard and does everything for the team. He is typical Sydney FC.

“He’s doing a great job and I consider him a key member of the team, 100 per cent. He’s getting stronger and stronger.”

Grant, 28, comes across as a happy-go-lucky bloke who seems to play his football as if it were a kickabout among mates on the beach.

But behind his free-spirited persona lies a fierce competitive attitude and steely determination to succeed at what he does.

He puts everything into his game at training and on the field, making him a dream professional for any coach.

Two years ago he came back from an anterior cruciate ligament injury to his left knee that kept him out of the game for almost a season. He suffered a similar injury to the right knee four years earlier.

Grant not only regained his right-back spot with the Sky Blues but was rewarded for his commitment and consistency by being picked in the Socceroos side for this year’s AFC Asian Cup and the campaign to reach a fifth straight World Cup.

Socceroos and former Sydney coach Graham Arnold knows him well and swears by his dependable protege.

Minutes after helping Sydney defeat their Melbourne rivals at Jubilee Stadium, Grant said he would have been prepared to play even without the benefit of travelling first class from Amman.

“I would have put my hand up to play … there is not much difference between business and first class,” he said.

“My legs are a bit heavy but I feel good.

“I’m happy at Sydney FC and I feel at home after being here for a long time.

“As a young fellow it was nice to be able to play for Sydney FC and It’s also an achievement for me to be regarded so highly by Bimbi."

Sydney were largely ineffective in the first half they dominated territorially and things went from bad to worse when towering Victory captain Ola Toivonen headed his team in front just before half time.

The Swede’s goal was a shock to the Sky Blues’ system and the fear of losing to a grossly depleted Victory side must have forced them into more resolute action.

Sydney pushed more men forward in the second half and with a 16,116 crowd behind them they turned things around with two goals in the space of eight minutes from strikers Adam Le Fondre and Kosta Barbarouses.

Sydney’s laborious win took them to second spot on the ladder, one point behind leaders Melbourne City but with a game in hand.