Federico Chiesa scored a fine goal and Italy held their nerve in a shoot-out as the Azzurri's unbeaten record survived a tough Wembley test.

In the 15th minute and then early in extra time, the chant of "Football's coming home" rang out around certain quarters of Wembley.

A handful of English supporters even waved the St George's flag excitedly, these people having sadly come down with a curious case of 'helluva match' fatigue.

The Spanish and Italian fans in London whistled in derision, united in incredulity. Before them a vintage Euro 2020 semi-final was unfolding, but their English brethren were farting out a Lightning Seeds song.

Like the Wimbledon wag who shouts "Come on, Tim" in an Andy Murray match, this was conduct that invited pity. Save it for another day, eh?

Besides, hadn't they read the signs?

An Italy fan strode down Wembley Way before kick-off in a tricolore flag bearing the slogan 'IT'S COMING HOME TO ROME', a giant red cross striking out 'HOME'.

And who would doubt that now?

Italy aren't going home to Rome yet, but when they do, they believe it will be as returning heroes. The Azzurri are through to the European Championship final, vying to land this title for the first time since 1968, a penalty shoot-out victory over La Roja sure to only enhance the sense of invincibility that now characterises Roberto Mancini's team.

That's 33 games unbeaten for Italy now, Jorginho their fifth taker in the penalty shoot-out with the glory, passing the ball into the right corner with an unimaginable degree of calm after Gianluigi Donnarumma saved from, rather inevitably, Alvaro Morata. 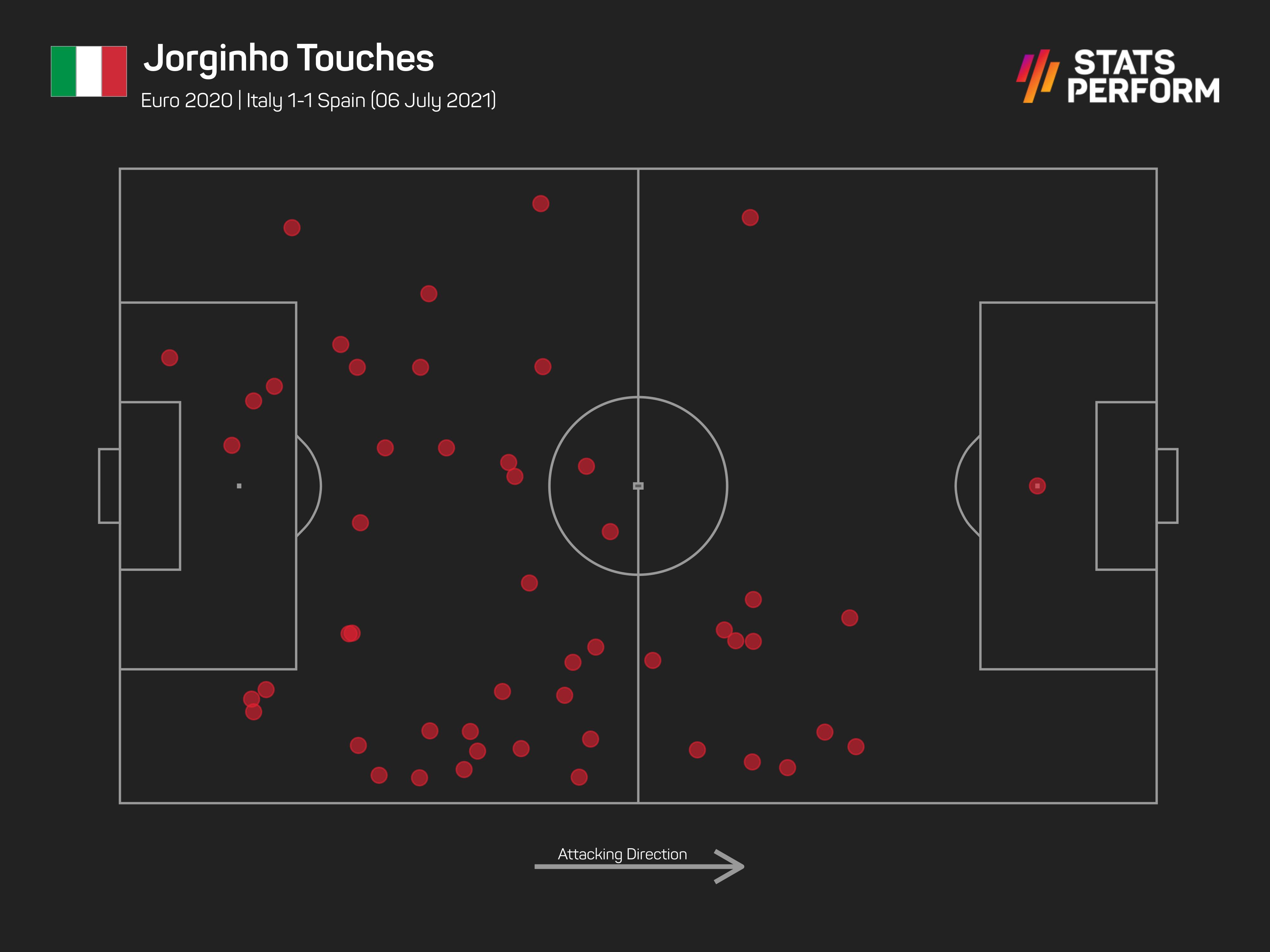 Italy's players raced to their supporters behind the goal, boss Mancini danced for joy with his coaching staff, and Spain held their heads in dismay.

Luis Enrique's Spanish team, whose tepid start to this tournament must have been some sort of smoke screen, would have been equally deserving winners of a gripping match.

They had 16 shots to Italy's seven, a dominant 70.1 per cent of possession, and their record of four in five penalty shoot-out triumphs in European Championship history seemed to bode well.

Yet that lone defeat came at Wembley, a full 25 years ago when England scuppered Spanish hopes in the quarter-finals. Luis Enrique was on the bench that day, an unused substitute powerless to directly impact the outcome, and history harshly repeated itself.

Italy looked for a while to be going through on the back of a glorious fast-break goal, clinically finished by Federico Chiesa, whose father Enrico played at Euro 96 for the Azzurri.

As the hour approached, Donnarumma clutched a tame Jordi Alba cross and put a plan into action.

Italy's players were crowded around their penalty area, as far as Spain were concerned, Alba and Co having spent the previous minute trying to plot a route through a thick wall of blue shirts.

And then suddenly the Italians weren't there, they were going this way and that, left and right, and the ball was going with them.

Donnarumma ran a few strides and rolled it to Marco Verratti, who dashed from the edge of Italy's penalty box and picked out a pass to Lorenzo Insigne tight to the left flank.

Forward, forward, forza Azzurri. Insigne threaded a near genius ball with the outside of his right foot behind the Spanish defence, and despite Aymeric Laporte preventing Ciro Immobile running through to score, the ball reached Chiesa. Eric Garcia stood off, allowed Chiesa to shift the ball to his right foot, and the winger lashed into the far right corner.

It was a goal that made Italy just the second side in European Championship history to have as many as five different players (Chiesa, Matteo Pessina, Insigne, Immobile and Locatelli) score two or more goals at a single edition of the competition, after winners France in 2000. 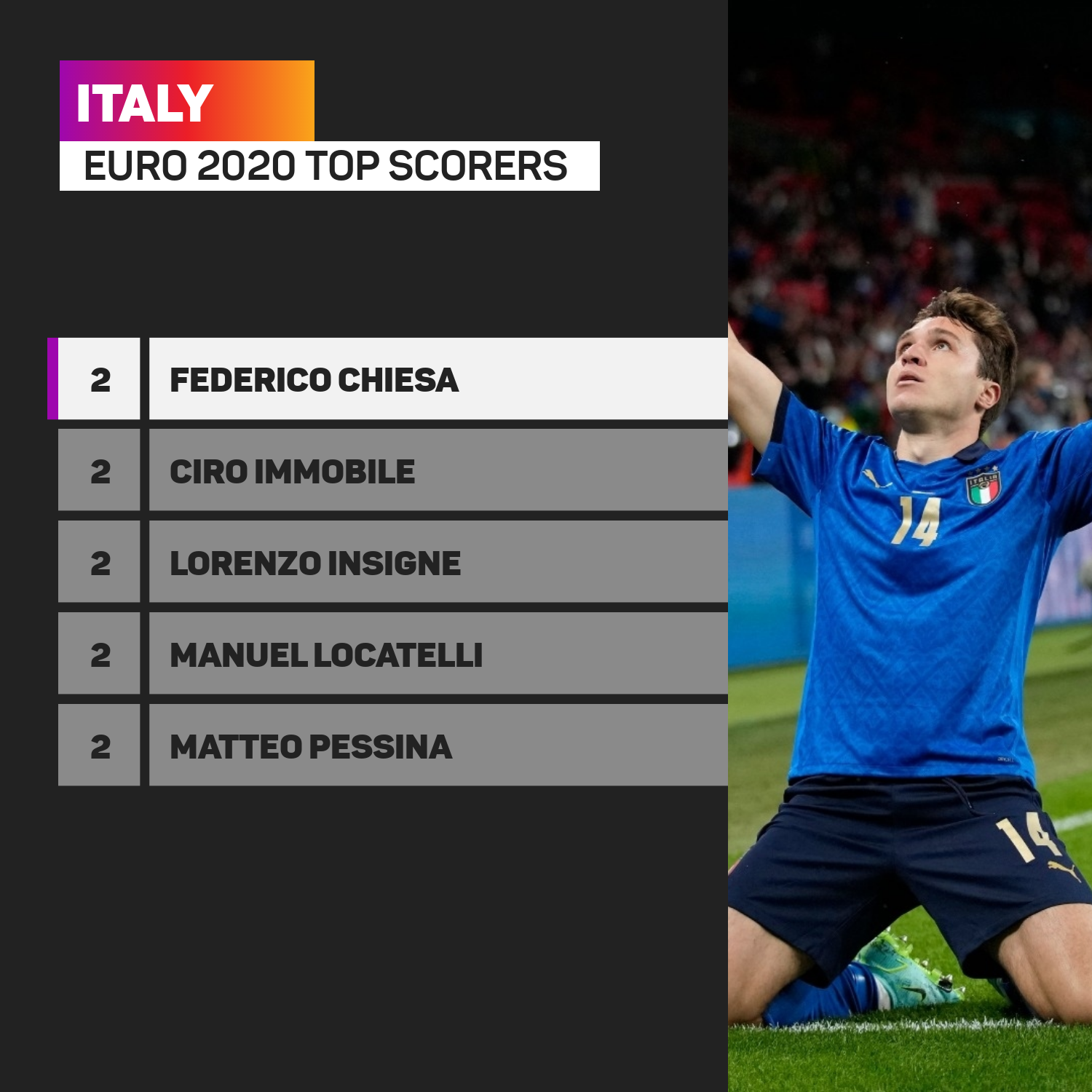 Mancini in his playing days was one of those footballers whose first yard was in his head, who would see things before others, who made up for a lack of any real pace with an abundance of awereness.

No wonder he looked exhilarated by Chiesa's goal, which came straight out of the quick thinker's playbook.

Mancini's one-time mentor Sven-Goran Eriksson told Stats Perform ahead of this game that Mancini was always a step ahead in his mind.

"He was able to see things way more quickly than any other player, even than me as a coach. And he would see that something could happen," Eriksson said.

"I like seeing the football played by Italy because they attack, they play the ball pushing forward, they don't play like tic-tac, tic-tac. They get the ball, they steal the ball and then go. They lose the ball, they fall back, they defend, aggressive."

This was Italy encapsulated against Spain, with the emphasis on the aggressive in the late stages, a tiring team resorting to what tiring teams sometimes must.

The Azzurri did not have a single shot on target in the first half, the first time that has occurred during the knock-out stage of a major tournament since their loss to France in the Euro 2000 final. They did, however, hit the bar seconds before the break, Emerson from a tight angle. 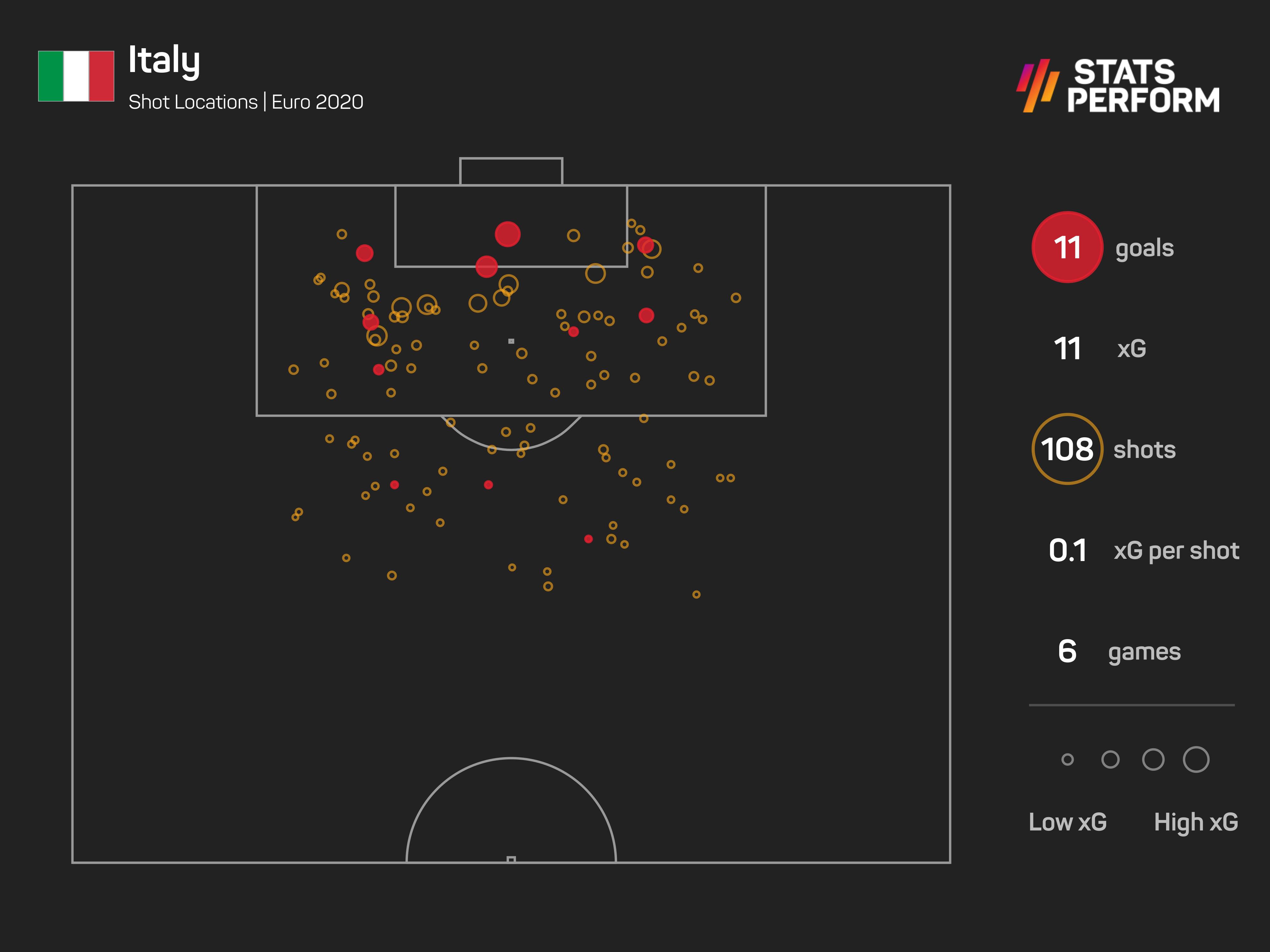 Italy's lead here lasted 20 minutes, Morata stepping off the bench and seemingly setting his tournament onto a positive course, after taking so much early flak in these finals.

Giorgio Chiellini, the 36-year-old captain of Mancini's team, was unable to keep pace with his Juventus team-mate as Morata sprinted past him to score.

The Morata narrative had more to give though, and it came as a surprise surely to nobody when Donnarumma smothered his timid penalty.

Jorginho was up next and Italy were home and hosed. They sat out the last World Cup, humiliated by failure to qualify, but these heavyweights of international football are back.

Mancini threw his arms around Donnarumma and Italy celebrated hard. England or Denmark await them in Sunday's final, also to be played at Wembley.

"Let's go back to Wembley, the dream continues," began Corriere dello Sport's write-up of this occasion.

When we talk about football coming home, and where its heartbeat lies, perhaps this year there's no place like Rome.