The attacking duo, deployed together for the first time in the starting XI this season, each found the net at Old Trafford as United booked their spot in the fourth round.

And their quality was in evidence immediately, the hosts moving ahead in the fourth minute through Rashford's cool finish.

Anthony Martial has been directly involved in a goal once every 46.8 minutes for Man Utd this season.

That opened the floodgates as United entered the break 3-0 ahead, Rashford adding a second before Lingard got in on the act.

Martial capped his fine display by finding the net in the 60th minute, before Burton grabbed a consolation through Lloyd Dyer with virtually the game's last kick.

It did not take long for United to assert themselves, as Michael Carrick slid a pass into Lingard, who – with his back to goal – brilliantly cushioned the ball into the path of Rashford to slot home.

They almost added a second immediately after, Carrick again freeing Lingard – only for the forward to see a goal-bound effort blocked.

But the Burton backline was quickly breached again, as Rashford doubled his tally for the evening in the 17th minute.

Daley Blind slotted a pass to the striker, who turned and unleashed a curling 20-yard effort off the inside of the post and into the back of the net.

Juan Mata was next to threaten, forcing Connor Ripley into action after nice play involving Blind and Martial.

Burton created a chance of their own midway through the half as Joe Mason chipped narrowly wide when one-on-one with Sergio Romero.

But any hopes of a revival ended 10 minutes before the break when Lingard completed a fine move by seeing an effort deflect home following fine work from Martial.

United were given a further boost at half-time as Luke Shaw was introduced for a first appearance of the campaign.

There was no let-up from Mourinho's men, with the impressive Martial brilliantly working an opening before having an effort saved.

However, he made no mistake moments later, sliding the ball into the corner of the net after being found by Rashford. 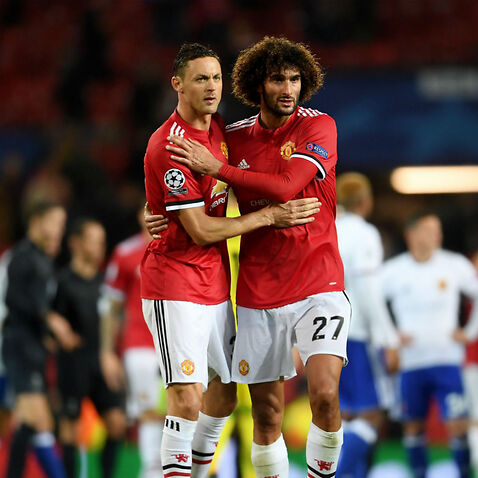 Matic and Fellaini have never been this good, says Mourinho

Rashford's hopes of completing a hat-trick were ended when he was withdrawn in the 64th minute, but United continued to drive forward.

Martial came agonisingly close to adding his second and United's fifth in the 80th minute, getting in behind the Burton defence and chipping just wide.

And the final goal eventually fell to the visitors as substitute goalkeeper Joel Pereira made a hash of collecting the ball after Mason had rattled the bar, with the ball falling to Lloyd – who picked out the bottom corner.