Kevin De Bruyne and Riyad Mahrez netted doubles as Manchester City returned to winning ways with a raucous 5-2 victory over Southampton at the Etihad Stadium.

Pep Guardiola's men saw a 21-match winning run in all competitions ended by Manchester United at the weekend, and some of the defensive problems from that 2-0 defeat remained as James Ward-Prowse scored the first-half equaliser from the penalty spot and Che Adams was on target before the hour.

However, an unexpectedly open contest worked in De Bruyne and Mahrez's favour, while Ilkay Gundogan chipped in with his 14th goal of the season in first-half stoppage time.

City are 14 points clear of United at the Premier League summit having played a game more, with their rivals in Europa League action this midweek.

The leaders started poorly but scored from their first attack of note in the 15th minute – De Bruyne making sure on the goal-line after clattering the crossbar when Alex McCarthy parried Phil Foden's shot into his path. Southampton were undeterred, with Ederson tipping Nathan Redmond's low strike behind and denying Jannik Vestergaard from the resulting corner.

Unfortunately for the City goalkeeper, Aymeric Laporte pulled back Vestergaard when trying to deal with the loose ball the latter save and Ward-Prowse made no mistake from the spot.

City felt they should have had a penalty of their own when McCarthy was played into trouble by Mohammed Salisu's backpass and hurtled into Foden.

A quickfire double from Guardiola's side undid all of the Saints' good work – Mahrez snaffling a shocking pass from Adams to curl in a wonderful finish before Gundogan poached their third after the Algeria winger's shot hit the post.

McCarthy saw enough of a Foden drive through a throng of bodies to save five minutes into the second half but he had no chance when Mahrez shimmied to engineer room and thump home with his trusty left foot. 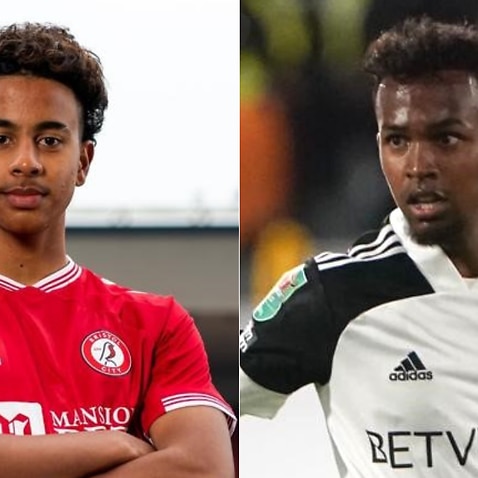 A pattern of ricochets falling pleasingly for attackers continued as Adams reduced the arrears but, following another McCarthy stop to frustrate Foden, the England midfielder laid off for De Bruyne to storm into the Saints box and rifle into the bottom corner.

In the final half-hour, the unlucky Foden and substitute Ferran Torres came closest to adding further gloss to the scoreline.

What does it mean? City avert post-derby wobble

Guardiola talked up United's lingering title challenge with seemingly unrealistic gusto before the Southampton game, but in this very strange season, a collapse in the final stretch is maybe not implausible. On the other hand, the fact City could rely on the dazzling trio of Mahrez, De Bruyne and Foden here, while some distance from their collective best, means a procession to glory is still the most likely outcome.

When Mahrez joined City from Leicester City in 2018 he was the club's record signing. That status has offered him few guarantees over the intervening years but this was his sixth consecutive Premier League start and he has four goals and two assists in that run of games. As defining moments await City on the other side of the international break, the 30-year-old has shown he can be a decisive influence.

In contrast to Mahrez, Laporte has generally been one of Guardiola's go-to picks. However, the rock-solid alliance established between Ruben Dias and John Stones has left him on the outside looking in this season. The Frenchman's penalty concession was clumsy and he failed to make a single tackle, interception or clearance as the Southampton attack gave City plenty to think about.

City travel to Fulham for their last Premier League game before the international break, while Southampton are back at St Mary's for a south-coast clash with Brighton and Hove Albion.