Manchester City youngster Phil Foden inspired a sensational comeback as England battled from 2-0 down to beat Spain 5-2 to claim the Under-17 World Cup title in Kolkata.

Foden was on target in England's defeat to Spain on penalties in the final of the European Under-17 Championship earlier in the year.

But the midfielder got his revenge as he scored the pivotal third goal and added a late fifth as England bounced back in stunning fashion from a Sergio Gomez brace that had put Spain in complete control.

England Under-17s are champions of the world!@ManCity's Phil Foden nets two as they come from behind to beat Spain 5-2 in the final 👏 pic.twitter.com/KkozZvcOFc

Gomez turned in the opener after 10 minutes and the Barcelona forward drove in a superb second to give Spain what appeared to be a comfortable advantage.

But a determined England side fought back and Rhian Brewster - who scored hat-tricks in England's quarter-final and semi-final wins - headed in Steven Sessegnon's cross to give England hope shortly before half-time. 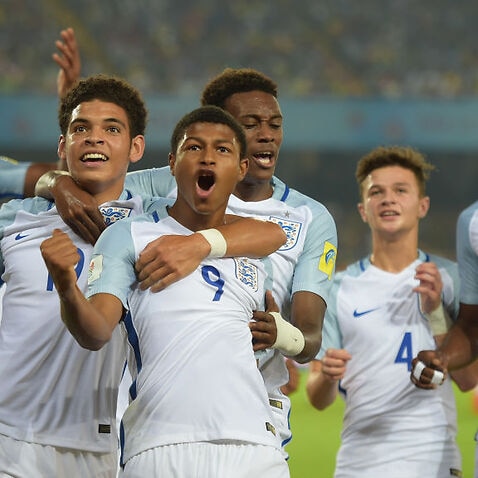 The Fulham full-back set up Morgan Gibbs-White for the equaliser and a suddenly rampant England then burst away from their European rivals, Foden tapping in at the back post after 69 minutes to put the Young Lions ahead.

Defender Marc Guehi scrambled in from a set-piece with six minutes to go before Foden thumped in his second of the game to complete a remarkable comeback for Steve Cooper's side that follows England's earlier 2017 triumph at the Under-20 World Cup.

Earlier in the day, Brazil beat Mali in the third-place play-off. Alan de Souza Guimaraes and Yuri Alberto were on target in a 2-0 win.