Former Manchester City forward and chairman Francis Lee spoke to Stats Perform about the prospect of buying a replacement for Sergio Aguero.

Tottenham Hotspur forward Harry Kane has given his strongest indication yet that he wants to leave Tottenham at the end of the season, stating his desire to play for a trophy-winning side.

Premier League champions City would fit that bill, while Kane has also been linked with the likes of Chelsea and neighbours Manchester United.

Kane, who will turn 28 in July, is level with Mohamed Salah at the top of the Premier League scoring charts heading into the final weekend of the season. 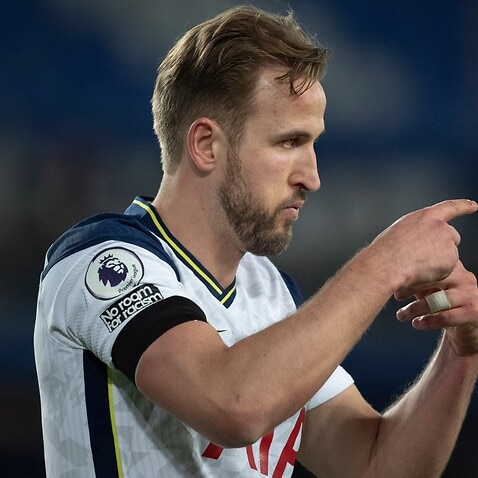 That suggests he remains in the very top bracket of Europe's top strikers, but Lee needs convincing that Kane would be capable of being a force for City for longer than a handful of seasons.

"There's three or four players who would suit us down to the ground and another three or four others who could slot into the team and probably be a sensation as well," Lee told Stats Perform.

He pointed to reports linking 20-year-old Borussia Dortmund sensation Erling Haaland and Aston Villa playmaker Jack Grealish with City, before adding Kane's name to the list of possible candidates for a close-season move.

"It'd be very difficult for Harry Kane to move to Manchester City because it would be big money for ... not a short period but maybe two or three years, something like that," Lee said.

Lee, who starred as a City forward from 1967 to 1974 and had a spell as the club's chairman from 1994 to 1998, knows there are plenty of prolific strikers who could potentially step into the City squad and replace Sergio Aguero, the record scorer who will leave on a free transfer at the end of this campaign.

Whether they are the right age and have the right qualities is a question for City manager Pep Guardiola, with Lee suggesting Romelu Lukaku, the 28-year-old former Manchester United and Everton forward, now at Inter, may have what it takes.

"There's a lot of players, there's quite a few players who would fit the bill," Lee said.

Since Kane became a Tottenham regular in the 2014-15 season, he has scored 162 goals in 230 Premier League games, with Aguero managing 130 in 187 appearances over the same period.

Kane has managed a marginally better conversion rate when presented with what Opta defines as 'big chances', scoring from 54.77 per cent of such openings, compared to 51.48 per cent by Argentine frontman Aguero.

Aguero's minutes-per-goal record is better though, with one every 105.78 minutes to Kane's one every 120.83 minutes.

But ostensibly, they are well matched, in both being highly prolific. Their total shot conversion rate over the last seven league seasons is almost identical, with Kane netting 18.39 per cent of his efforts on goal and Aguero sticking away 18.34 per cent of his attempts.

That suggests it would be a near like-for-like replacement operation if Kane – five years younger than Aguero – came in from Spurs.

Lee is certain that City must replace Aguero. Although they have had success without him in their starting XI lately, and when deploying a 'false nine' system, Lee, 77, has no doubt Guardiola has to bring in a recognised goal-getter.