Pep Guardiola lauded Riyad Mahrez's appetite for the big occasion after the Manchester City winger's brace secured a 2-0 win over Paris Saint-Germain and a place in the Champions League final.

Mahrez's free-kick sealed a 2-1 win at Parc des Princes in last week's first leg and he netted a goal in each half on Tuesday to close out a 4-1 aggregate triumph.

The former Leicester City favourite has found the going tough at times since joining City in 2018 but he is now a go-to pick for Guardiola, his four goals and two assists in this season's competition putting the club one game away from elusive Champions League glory. 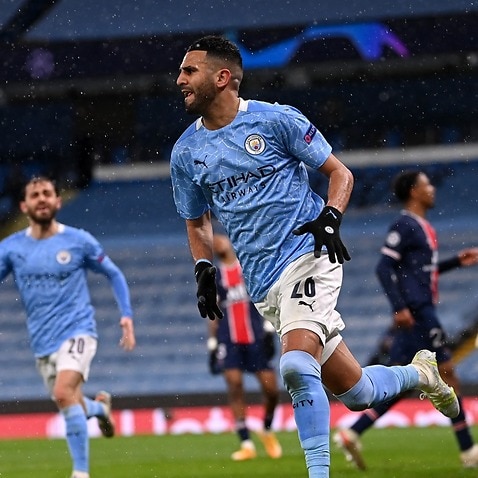 "We know his quality quite well. He is a fantastic player.

"The players in these stages are judged how they behave in the biggest scenarios, the big tests.

"He loves it and enjoys it. He made a good goal, the first one with right foot and the finish for the second. Three goals over the tie, he deserves big compliments.

Fernandinho was a surprise selection on his 36th birthday, but Guardiola felt the club captain excelled.

"Especially in the second half he was incredible," said Guardiola. "We adjusted a little bit [at half-time] to support John [Stones] and Ruben [Dias].

"He was so good, really, really good. It was his birthday, a big present. He has been an extraordinary captain this season, leading us in bad moments and he played really well."

Guardiola conceded it was strange to play such a key game behind closed doors, even if that has now been a reality of the coronavirus pandemic for almost a year.

Before the match, a group of City fans – some with flares – gathered to welcome the team bus to the ground.

"I have to say it was socially distanced but we loved it," Guardiola said. "It's nice to be in a final but we missed them."

"Of course, it was so weird playing the semi-final of the Champions League in empty stadium.

"The club belongs to the people, that's for sure. We are here for a period but the fans always stay. I am pretty sure they are so proud."