Western United coach Marko Rudan believes his side have what it takes to repeat the impressive efforts of last season as the Melburnians look to make it three wins in a row this Sunday against Wellington Phoenix.

Sitting 10th on the ladder, United have three games in hand and are ten points adrift of league leaders Central Coast Mariners but just four outside of the top six.

“A lot of those teams from the top six have played more games than us and they’ve had that continuity which is important. We’ve had two 14-day breaks, that’s never easy. The players want to play,” said Rudan.

“Having played the fewest matches in the competition, we’ve got a lot of games up our sleeve and the most important thing for us is that we’ve got every single player fit and healthy for the first time this season."

“I don’t even know what my best 11 is yet because we’ve had to chop and change a lot and we haven’t had players like Inman or Risdon, the Spaniards came a little bit late, Diamanti and Bes had a chequered pre-season, Brendan Hamill was coming back from injury, Durante didn’t have a pre-season at all, so now it’s all coming together slowly.” 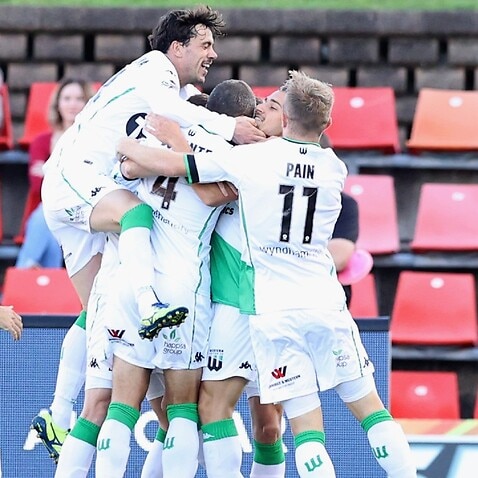 The return of Socceroos defender Josh Risdon to the training paddock was a welcome addition for Rudan, after the 28-year-old developed a tibial stress fracture mid-way through pre-season.

“Rizzo’s important. When you look at his contribution last year, seven or eight assists from that right-wingback position is incredible, plus a couple of goals himself as well.”

“It’s great to have him back. There was a big round of applause, the whole team got around him because he was back on the pitch. It was good to see Rizzo with a smile on his face, he did it tough, what he had to go through is incredible.”

“There’s a lot of competition for places now and I daresay in a month’s time, if we can keep everybody fit and healthy, it’s going to be a headache for me to put a starting 11 together,” Rudan revealed.

Although, the former Phoenix manager conceded he “wasn’t happy” with the side's respective performances against Newcastle Jets or Melbourne City, the gritty wins have bolstered the team's confidence midway through the competition.

"The only way is up as far as we’re concerned. We’ve got momentum now, we’ve got confidence, even though we haven’t played particularly well in the last two games, the boys know there’s a lot more left in us.”

“We’ve beaten everybody in the competition in our short existence and I think the game against City, where no one expected us to even get a draw out of that game - for us to find a way to win tells you that we’ve got some big players at our disposal, players who know how to step up when the big games matter.”

Last season, United managed to finish 5th on the table in their debut year, losing 2-0 to grand finalists Melbourne City in the semi-final, but Rudan is clear about the standards he has set for remainder of the current campaign.

“Our expectations are at least to make the finals, that’s the absolute minimum as far as we’re concerned.”

“We understand that our home games we’ve moved from Geelong to Ballarat, to Tasmania, to AAMI Park - it’s irrelevant as far as we’re concerned. It is unique, no other team is doing what we’re doing, but we said from day one there are no excuses. We’re here to grow our football club, to grow our fan base, to be competitive every week.”

“We’ve got a lot of confidence that we can do damage again like we did last year.”