Josh Magennis came off the bench to fire Northern Ireland to the top of Group C with a late winner in a 2-1 victory over Belarus in EURO 2020 qualification.

Northern Ireland had controlled proceedings at Windsor Park but it looked set to be a frustrating evening until Magennis popped up with three minutes remaining.

His close-range finish was a rare bright moment in the second half after Igor Stasevich's deflected strike had cancelled out Jonny Evans's third international goal in the opening 45 minutes.

Victory moves Michael O'Neill's side, who beat Estonia in their opener, to the top of the group after Netherlands were beaten by Germany in Amsterdam.

🙌🏻 There’s a long way to go but just look at this beautiful sight!! 👀👇🏻#GAWA pic.twitter.com/DwufbBBRFU

The hosts quickly settled into their rhythm and dominated large parts of the opening exchanges, although clear-cut chances were a rarity as quality proved elusive in the final third.

Lone striker Kyle Lafferty cut a frustrated figure as he failed to find room to latch onto enticing deliveries from midfield and his only chance of note came from long range.

However, that shot – which was pushed wide – led to the game's opening goal, Belarus unable to deal with a corner routine as Evans headed home from Steven Davis's front-post flick.

Falling behind seemed to spark Belarus into life and three minutes later they were level as Stasevich's shot clipped Stuart Dallas and looped over the stranded Bailey Peacock-Farrell.

A cagey match failed to produce much of note in the second half as Northern Ireland continued to press without stretching Andrey Klimovich.

Half chances fell the way of Paddy McNair, George Saville and Lafferty but they were all spurned as Belarus defended resolutely.

There was nothing they could do about Magennis's winner, though, as the Bolton Wanderers forward tapped in Dallas's low cross. 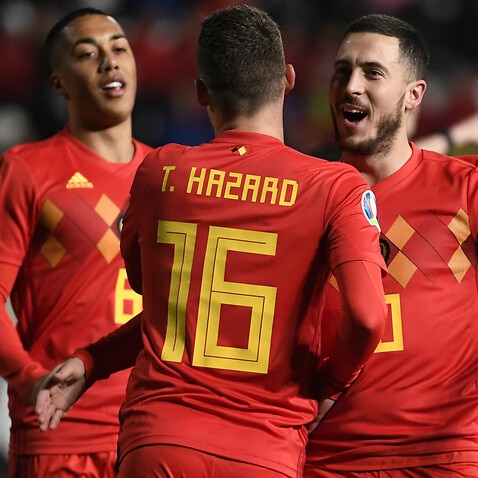 With Germany and Netherlands in Group C, Northern Ireland knew getting points against Estonia and Belarus would be crucial – particularly given their first four games were against the latter two nations. After the opening two matches they have six points, giving them hope of challenging for a top-two berth.

Super-sub Magennis was a handful during his 22-minute cameo, capped with a cool finish after coming in from the flank to score his fifth international goal.

Lafferty led the line again for Northern Ireland but once again he failed to find the back of the net, his goal drought stretching to 14 games – a run that goes all the way back to November 2016.

Key Opta stats:
- Northern Ireland have won each of their two games against Belarus, including a 3-0 victory in the only previous meeting between the two sides back in May 2016.
- Belarus have lost consecutive games in all competitions for the first time since November 2017 (a run of five).
- Northern Ireland have lost just one of their last 12 European Championship qualifiers (W8 D3 L1) and are unbeaten in eight such games since a 2-0 defeat against Romania back in November 2014 (P8 W5 D3 L0).
- None of Northern Ireland's last 18 home games in all competitions have finished in a draw (W13 D0 L5), since a 1-1 draw with Hungary in September 2015.
- Belarus have conceded six goals in their last two matches (four versus Netherlands and two versus Northern Ireland) – more than they conceded in their previous 11 games combined in all competitions (five).

In June, Northern Ireland travel to Estonia before the return match with Belarus in Minsk three days later. Ahead of the visit of O'Neill's men, Belarus have the daunting prospect of hosting Germany.