Romelu Lukaku sent his support to Christian Eriksen after setting Belgium on their way to a 3-0 victory over Russia in their Euro 2020 opener on Sunday (AEST).

Lukaku's Inter team-mate Eriksen is awake in hospital and undergoing tests after collapsing during Denmark's encounter with Finland in Copenhagen earlier in a traumatic second day of the tournament.

Red Devils record goalscorer Lukaku said "Chris, I love you" into a television camera following his opening goal in the Group B match at Saint Petersburg Stadium.

Thomas Meunier scored Belgium's second in the first half and the impressive Lukaku added a late third as the top-ranked side in the world moved level on points with Finland, 1-0 winners over Denmark in a game that resumed following encouraging news on Eriksen. 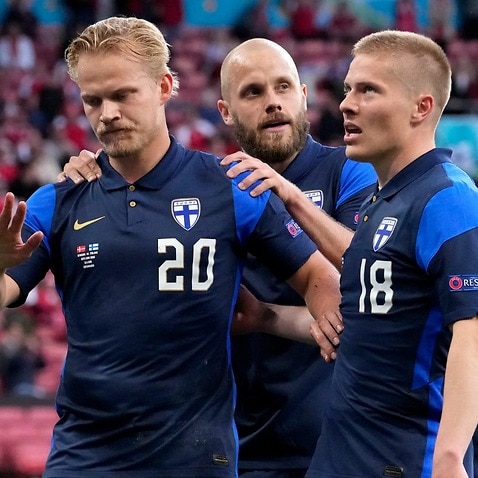 Belgium was gifted a 10th-minute lead by poor defending from Andrey Semenov, the centre-back making a mess of an attempted clearance and giving the clinical Lukaku the opportunity to swivel before finding the corner of the net with his left foot.

The striker, who had been standing in an offside position but was played on by Semenov's terrible touch, almost set up a second goal when he picked out Leander Dendoncker with a perfectly weighted pass but the midfielder blazed over the crossbar as he burst into the penalty area.

Timothy Castagne and Daler Kuzyaev were substituted following a clash of heads and Meunier grasped his opportunity only seven minutes after coming off the bench, finishing with his left foot from 10 yards out after Anton Shunin could only palm a cross into his path. 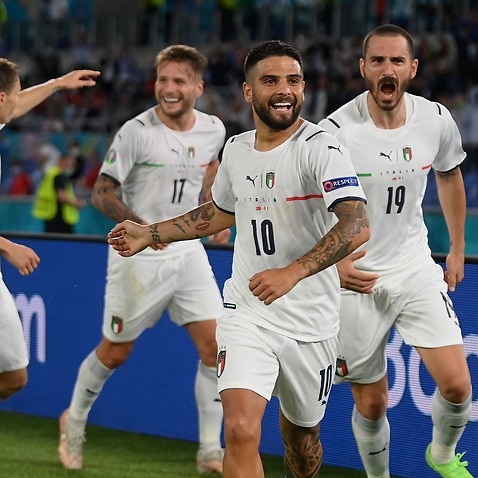 Commanding Azzurri return to the big time with historic victory

Russia also lost Yuri Zhirkov to injury during a first half that Roberto Martinez's men bossed, Yannick Carrasco coming close to adding a third goal when he was off target at the end of a mazy run.

Roared on by a partisan crowd, Russia showed more intensity after the break but lacked the quality to breach a well organised Belgium defence.

Eden Hazard came on with 19 minutes to play as he builds up his fitness following an injury-plagued season and there was concern for Jan Vertonghen was replaced not long after undergoing treatment.

Lukaku capped an excellent display by completing a double two minutes from time, racing onto a pass from Meunier and coolly finishing with his right foot.

What does it mean? Belgium cruise as Russia rue costly lapses

Belgium are among the favourites to win the tournament and still have the likes of Kevin De Bruyne, Hazard and Axel Witsel to return to the starting XI.

They won all 10 qualifying matches - including two against Russia - and managed the game well after Russia made life too easy for them in the first half, conceding two soft goals.

The Red Devils are unbeaten in 10 games and ought to progress as group winners, with Denmark and Finland to come. Russia, on the other hand, will have to raise their game if they are to advance following a disappointing start on home soil.

Lukaku had a brilliant season for Inter as they won Serie A and has been involved in 26 goals in 19 games for his country since the end of the 2018 World Cup - scoring 22 and setting up four.

The 28-year-old looks at the peak of his powers, leading the line brilliantly once again. The former Manchester United marksman’s brace came from only three shots in the match and he looks a strong Golden Boot contender.

Russia goalkeeper Shunin will not want to see a repeat of Belgium's second goal.

He ought to dealt with a cross from the left, but instead put one on a plate for Meunier and there was no way back for the hosts.

Russia face Finland at the same venue on Wednesday, with Belgium travelling to Copenhagen to take on Denmark at Parken Stadium the following day.