The 2018 FIFA World Cup showed very clearly that the Socceroos are not very good at taking their chances. Australian football has now been presented with a golden opportunity to secure its future that it cannot afford to miss.

Football Federation Australia chairman Steven Lowy has announced his decision to step down in November, opening the door for a complete revamp of the administration of our game that in the last few years has been immersed in disharmony, mistrust and outright antagonism and bitterness.

His announcement will provide those who opposed his controversial reign with hope that football will one day reach its true potential and become a big player in Australia's sporting landscape.

It is unclear if the FFA board will follow in their chairman's footsteps and walk away. 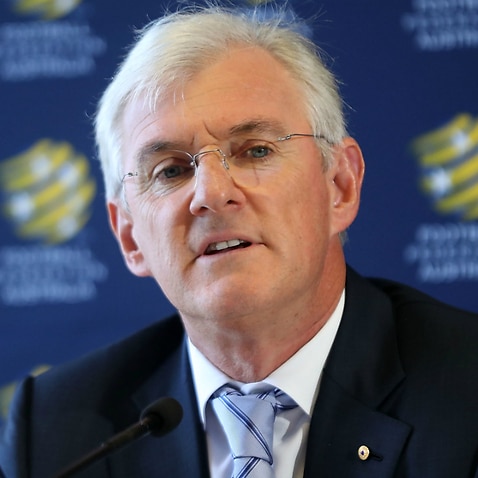 And it is even more unclear who might be interested in taking up the arduous position of chairman or how the congress will be composed.

But whoever is entrusted with the responsibility of governing our game in the next few years should bear in mind that there will never be another chance to make sure football is what it purports to be: a game of and for the people.

A total review of how we run our game is imperative if we are to go forward.

For far too long FFA have treated the game's stakeholders with a degree of contempt that sparked the simmering and damaging feud between the clubs and the governing body.

'My way or the highway' worked for a while for former chairman Frank Lowy when the fractured game needed to be ruled with an iron fist.

Those times have thankfully gone and the game is now in a stronger position technically if not financially ... yet it needs to take the next step forward.

And you do this by proper and genuine dialogue, not by seeing people like supermarket customers. Fans are not clients but the bread and butter of the game and should be treated accordingly.

Steven Lowy has made so many enemies in his relatively short reign that it could take years to undo the collateral damage he has caused the game in barely three years.

He says he loves the game and he is not in it for personal gain, but that is the least one expects from anyone who puts his hand up for the top job.

Billions of people love the game but only a select few show leadership qualities. Clearly Steven Lowy is not one of them, judging by the legacy such a disliked leader will leave behind.

The 10 A-League clubs would be breathing a sigh of relief - if not doing cartwheels - at the stunning development that is remarkable even by football's standards.

They now should be in a strong position to gain more control over their own destinies.

But with greater control comes a bigger responsibility.

The clubs and their frustrated owners have to show that suspicions their motives behind their opposition to FFA are of a financial nature are unjustified.

They have to show that by having a greater say in how to manage their own product they will never disregard the needs of the game overall, such as the grassroots.

It is fine for a coach to criticise a colleague for his methods but doing the same thing when given the chance to replace him would not improve matters.

Easier said than done when you are an owner who has put millions into a football club and is eager to get some of it back.

But that is the challenge facing the A-League clubs: they have to demonstrate that they are rebels with a cause not greedy merchants out to prey on their supporters' passion and loyalty.

If the clubs act in a way that is perceived as egoistic and self-centred we will have this same scenario all over again in a few years.

And the significance of today's momentous events will be lost.

Perhaps there has never been a better time for creating an independent A-League and letting FFA run the national teams.