The brilliance of Toni Kroos is that his playmaking so often looks so simple. As Liverpool learned on Wednesday morning (AEST), stopping it is no easy task.

Everyone, even Liverpool players and fans, could understand Vinicius Junior's reaction.

It was 27 minutes into the Champions League quarter-final first leg, around 30 seconds after Real Madrid's opening goal, finished with stylish composure by the Brazilian. He turned to the architect, Toni Kroos, and bowed.

It was a simple gesture to mark the simple brilliance of Kroos' long pass. A swing of the right foot, a burst of water from the slick Valdebebas turf, and the ball was arcing through the darkening Spanish sky and into Vinicius' run, right between two Liverpool defenders.

At 60.4 yards, it was the second-longest pass of the first half by an outfield player, and unquestionably the most impactful. It was also the fifth attempted long ball by Kroos in the first 45 minutes, four more than Liverpool's starting midfield trio managed between them. 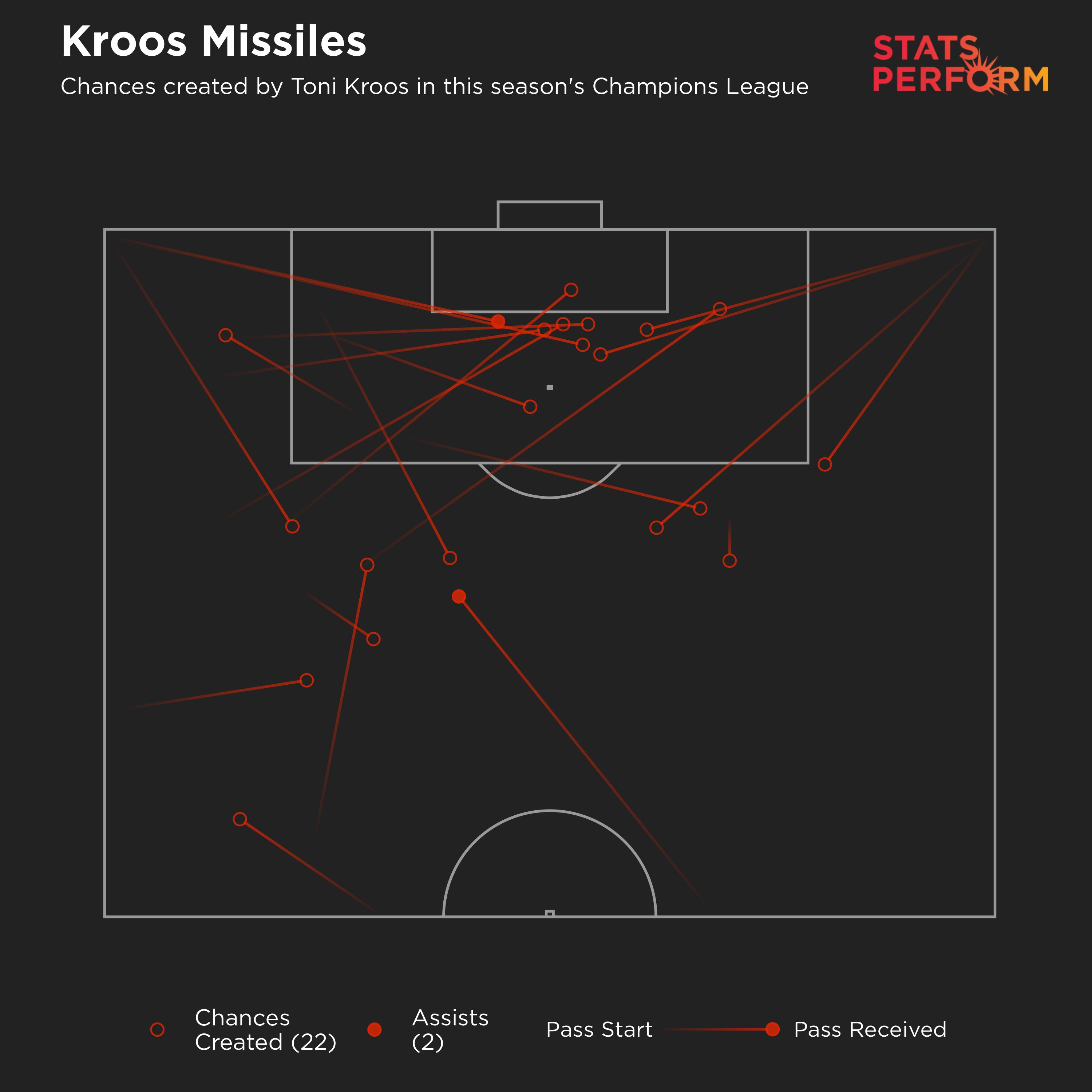 As the long deliveries towards Ferland Mendy and Vinicius down the Madrid left mounted, so did the uncertainty in the Liverpool defence. Trent Alexander-Arnold faced runners before him and the ball overhead, and he never seemed quite sure which one to deal with. When Kroos was again gifted time to lift his head and curl another pass towards the right-back, panic took over; his attempted header back to Alisson was gratefully pounced on by Marco Asensio.

That one didn't look a particularly complex pass. Very often, they don't. Therein lies the magic of Kroos: taking the art of the playmaker and making it mundane. There is such swaggering simplicity to his play that it sometimes looks the easiest thing in the world, yet few can match it, and fewer can stop it.

Vinicius: "I always keep working. My teammates encourage me to do so. They give me confidence. Toni Kroos is incredible, he is a legend. Nobody can play like him. He has a lot of class." #UCL pic.twitter.com/Y7pd9c8dya

A timely reminder of his class. 🙌 pic.twitter.com/M9LyiF9SON

He ended the contest with 68 of 75 passes completed, with 90.7 per cent accuracy, the highest figures in the match by a Madrid player. Forty-four of those passes were made in the Liverpool half. Four of them created goalscoring chances, twice as many as any other player.

This isn't the Liverpool who won this tournament two years ago, of course, but neither is this the same Madrid that lifted four out of five Champions League trophies from 2014 to 2018. But Kroos won three of those, and on this form, he gives them a great chance of winning another. That indomitable triumvirate of Kroos, Casemiro and Luka Modric, just when it looks like it's finally run its course, proceeds to run a Champions League quarter-final match from start to finish.

With around five minutes left and the score at 3-1, Kroos played a blind ball across the Madrid half straight to Sadio Mane. Eder Militao and Lucas Vazquez reacted quickly, snuffing out the danger, as Kroos kept to the left and watched the play unfold, impassive, in control.