In late 2004 I phoned Laszlo for a huge favour, one of many he would do for me in the course of our 36-year friendship.

I was looking after the football coverage of Sydney's The Daily Telegraph those days and on the morning of November 7 we had an unpleasant story to report: Johnny Warren had lost his battle with cancer.

The sports editor wanted a fitting obituary. There's no other person, I told him: it's got to be Les Murray.

I rang Les in the early afternoon to ask him for a tribute to one of his best friends.

He had had a couple of drinks that day to drown his sorrows but he said: "Of course, when do you want it?"

As always, Les did not fail me and in an hour or so he filed a beautifully crafted and heartfelt obituary on his old mate and the Tele gave it the prominence it so richly deserved. 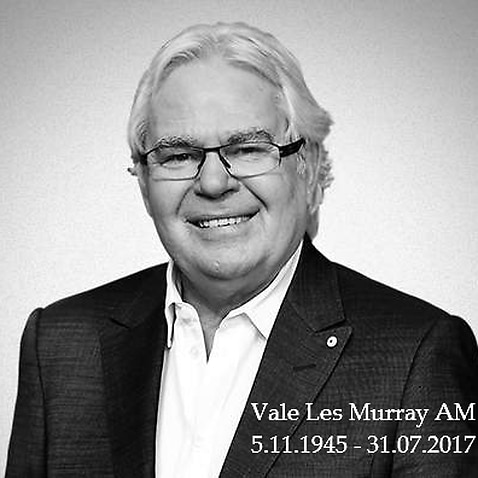 Les was that sort of bloke: loyal to his friends, generous with his time and always there when you needed him.

One day I rang him for a quote on a breaking story and he sounded a bit tired. He still gave me the quote even though it was in the middle of the night in Mongolia.

Les, who died on Monday after a long illness aged 71, was a man of style and he loved life because he was a man of the world which for him had no borders.

He needed his comforts and his top hotels to be sure and in his many travels he would always seek a good meal and an even better red to round off the day.

But the flashy and glitzy restaurants were never really his preferred option. "Let's find a typical place with character where the locals go," he once told me.

This is because if he happened to be in Indonesia, South Africa, Bolivia or Uzbekistan he reckoned the best way to learn about a country and its culture is to mix with the locals in a place that looked and felt like their own not one of some multinational chain.

It's called respect, which is probably why he always made an effort to learn the right pronunciation of every first and second name he uttered either on television or in private conversation.

If you are going to mention anyone you owe it to him or her to pronounce the name correctly.

Modern Aussie journalism would do very nicely with such high standards.

Australian football is reeling from a true icon of the world game, whose impeccable behaviour, real football mentality and high standing in the community will not be forgotten easily.

When I came to Australia in 1981 and soon discovered to my deep frustration the game's place in a country besotted with such strange games as Australian Rules, rugby league and cricket, Les would offer solace and plenty of conversations about the game we both loved with a passion.

He would be the only one I talked to who knew that the European Cup was not some sort of foreign gelato to hit our stores but football's most important club competition.

He knew that there was more to foreign football than Liverpool, Manchester United and the FA Cup.

And he knew above all that if Australia was to make it in the world game it would have to learn to appreciate the value and appeal of football at large.

Les was generous enough to introduce me to SBS.

Les leaves us with a rich legacy and a massive hole to fill.

The game is much stronger now than it was when he made his first tentative steps in Australia in the late 1970s.

It enjoys a profile that he has helped build with his sheer professionalism, dedication and love for the game.

Yet the greatest legacy he could leave is for aspiring journalists to follow in his footsteps and learn to report with fairness and respect and without fear.

Les Murray led by example throughout his career and I'm sure he will keep fighting for our game deep into extra time.