Socceroos star Mathew Leckie provided two assists as Hertha Berlin's DFB-Pokal match with Hansa Rostock had to be suspended, after fans caused havoc with huge numbers of pyrotechnics in the away end of the ground, during their 2-0 win.

The Australian attacker headed on a corner for Mitchell Wesier's goal in the 86th minute, before unselfishly squaring the ball to Vedad Ibisevic six minutes later to round out the win. 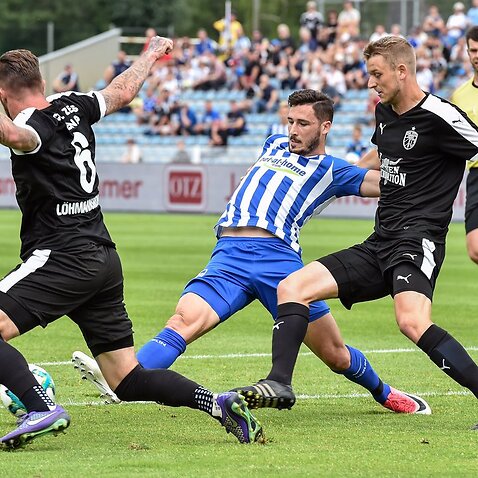 Earlier, Coloured flames and smoke lit up the section of Ostseestadion housing the visiting Hertha supporters as several flares and fireworks were let off in the second half.

Referee Robert Hartmann had earlier briefly halted the match due to missiles being thrown onto the pitch, before the problems escalated.

Fireworks were aimed from the Hertha section towards Hansa fans, while seats were said to have been set on fire and flags burned among both sets of supporters.

Hertha Berlin’s cup match against Hansa Rostock has twice been suspended tonight after pyrotechnics were let off inside the stadium pic.twitter.com/ojEv5z2GM3

The players and officials headed for the tunnel for a period of 15 minutes in the second half, with the scores at 0-0, before the game resumed after police stepped in to further segregate the supporters.

In other DFB-Pokal clashes, Schalke progressed from their clash with BFC Dynamo, Yevhen Konoplyanka's double securing a 2-0 win.

Nurnberg were 2-1 winners and Duisburg and Paderborn saw off St Pauli by the same scoreline.