Leckie departed long-term home Hertha Berlin at the end of the Bundesliga season and is yet to announce a new home.

The 30-year-old is expected to play a key role in Australia's four games in Kuwait, but said he wasn't looking at them as an opportunity to put himself in the shop window.

"In terms of where I'm going the decision hasn't been finalised," Leckie told reporters on Monday.

"I still need to find out what's the best thing for me as a footballer and also for my family.

"Obviously we're here with the national team so (I'm) more focused on that and I'm sure what happens with me will come out in the coming weeks, or if not couple of months.

"We're looking to be successful here as a team and I'm hoping to put in some good performances for the team.

"So it could help (attract a new club) but I didn't really think about that. I'm more or less focused on getting the four results that we need." 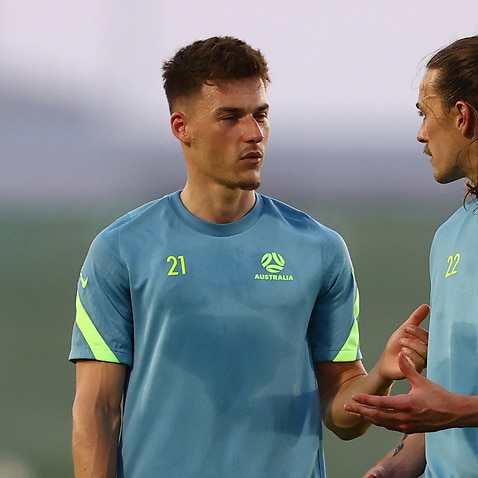 Leckie said finding a club where he would play week-in, week-out amid the Socceroos' road to Qatar 2022 was crucial, especially after limited game time at Hertha last season.

"I've had a very good career until now, overseas in Germany.

"The amount of games that I've played and played pretty consistently, minus the past year," he said.

"One of the main things for my next club will be that I have that opportunity to potentially play, week in, week out.

"Naturally, then it's up to me to perform and keep my spot."

Graham Arnold's squad was scheduled to relocate from Dubai, where they had a training camp, to Kuwait on Monday.

The Socceroos are top of group B with four games to play and resume their campaign against second-placed Kuwait on Friday morning AEST.

Leckie scored a brace when the Socceroos last played Kuwait in a 3-0 victory in September 2019 that kicked off the current stage of qualifying.

"Obviously the circumstances are a little bit different now that we're playing all our remaining games here in Kuwait," he said.

"It's going to be a little bit tougher than normal but we've had enough time to prepare now and we've been here for over a week, most of us, so I think we will be more than ready for the games."