Wycombe gained fame with their run to the semi-finals in 2000-01, but nothing from that campaign - even Roy Essandoh's winner at Leicester City - could match the drama that unfolded in this fourth-round tie.

Twice, it appeared Gareth Ainsworth's League Two side would stun their illustrious opponents as they led 2-0 at the break thanks to Paul Hayes' brace and then 3-2 with six minutes of normal time remaining when substitute Garry Thompson headed home superbly.

Son's deflected drive and Vincent Janssen's penalty cancelled out Hayes' double midway through the second period, before Thompson's goal had the visiting fans in dreamland once again.

Every player marked out of 10 from an FA Cup thriller at White Hart Lane - https://t.co/DjZ2jAr2Lv pic.twitter.com/6r5K6mwd6L

But Alli, who, along with Janssen and Mousa Dembele was introduced off the bench by Mauricio Pochettino after nine changes to the original starting XI from Spurs' previous game, levelled matters once again in the 89th minute with a coolly taken finish.

With Ainsworth's side hanging on for a replay, six minutes of stoppage time were signalled and as the clock ticked over into a seventh, Son got free in the box and side-footed past goalkeeper Jamal Blackman with covering defender Joe Jacobson only able to slice an attempted clearance into the roof of the net.

It was a devastating finale for Wycombe, who came into the game on the back of a 16-match unbeaten run, and their confidence was evident as they went close to going ahead inside the first minute.

Sido Jombati's deep, looping cross from the right was headed back across goal by Adebayo Akinfenwa, but an unmarked Hayes could only nod against the crossbar from three yards.

Wycombe's first nervy moment arrived in the 19th minute, a mix-up between Jacobson and Blackman presenting Son with the ball but the South Korean fired wide with only Jacobson covering.

And that miss proved costly as Josh Onomah half-cleared a corner from the right and the ball dropped to Hayes, who thumped home a first-time left-footed volley.

Hayes intervened at the other end shortly afterwards, clearing Moussa Sissoko's effort from in front of his goal-line before Blackman's fine stop denied Son's low drive.

Remarkably, Wycombe doubled their lead nine minutes before half-time. Sam Wood, played in by a smart Akinfenwa pass, raced away down the right and was brought down by Cameron Carter-Vickers, Hayes sending his penalty down the middle.

Son continued to look a threat and he reduced the arrears on the hour when the South Korean forward's driven cross deflected off Jacobson and beat Blackman at his near post.

And Spurs were back on level terms shortly afterwards as Aaron Pierre blocked off Janssen on the right-hand side of the box, the replacement just squeezing his penalty past Blackman low to the keeper's left. 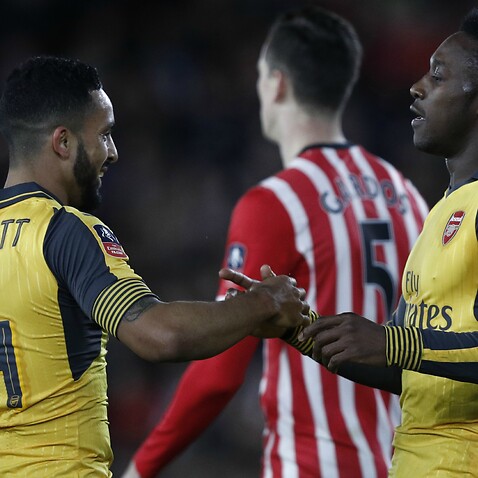 Kieran Trippier's rib injury meant Spurs had to play the last 15 minutes a man light and Wycombe capitalised on the extra space down Tottenham's right as Myles Weston surged clear and crossed for Thompson to head home.

But the drama was far from over, Alli keeping his composure to slot beyond Blackman.

And there was worse to come for Wycombe, as good Spurs interplay released Son and the desperate Jacobson could not prevent the winner, giving Tottenham the final say in an enthralling encounter.